We’ve all seen our fair share of late drama on the football pitch but this might be the best yet: Irish player Glen McAuley scores from inside his own half to tie a game at 4-4 with the last kick of the game after extra time.

McAuley, formerly on the books of Liverpool, had already written his name onto the scoresheet twice as his club, Athlone Town, chased a late equalizer in an FAI Cup game against rivals Waterford FC – and with the clock ticking towards four minutes of injury time at the end of extra time in the trilling cup encounter, the 21-year-old decided to go to throw caution to the wind.

Moments after kick-off following a late Waterford goal, McAuley and Athlone were in last-chance saloon as the club’s nine other outfield players surged forward in expectation of a floated long ball being delivered by McAuley.

Instead, though, he took everyone on the pitch by surprise by driving a thunderous shot from inside his own half towards the Waterford goal – and it lofted over the backtracking goalkeeper into the net to complete McAuley’s hat-trick and send players, coaches and fans alike into raptures.

Absolutely incredible goal by Glen McAuley to score his hat trick and equalise for Athlone Town, the game goes to penalties! 😱@AthloneTownAFC 4-4 @WaterfordFCie

The script wasn’t quite the Hollywood affair it might have promised, as McAuley and Athlone Town lost the ensuing penalty shootout and were eliminated from the cup competition.

Still, McAuley will surely never score a better goal in his career – and as they say in Ireland, he won’t have to pay for a pint in Athlone for as long as he lives.

Despite Town’s cup journey ending on Friday night, something tells us that McAuley’s mood will be lifted by the Puskas Award nomination which is surely heading his way later this year.

now thats drama, concede to go 4-3 down with seconds to go, #holdmybeer

That’s one for the ages. Great stuff Glen.

“Now that’s drama,” one fan wrote of the goal on Twitter. “Concede to go 4-3 down with seconds to go, #holdmybeer.“

“That’s one for the ages. Great stuff, Glen,” agreed another, while a third said that the strike was even more impressive than similar goals scored by some of football’s biggest names.

“Rooney, Beckham sit down,” they wrote. 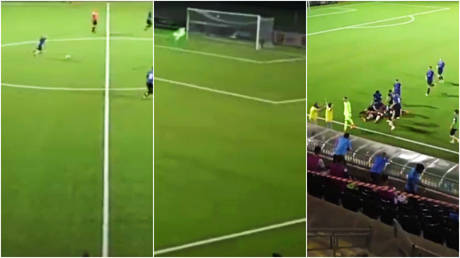