Moscow-based Mezhulmyan looked on course for a ninth successive win in a ferocious opening two rounds, leaving Mamedov’s face a bloody mess as he faced the prospect of a first defeat since 2009.

Nurmagomedov had posed with Mamedov while speaking of the sacrifices made by fighters during the week, and the unbeaten UFC great would have been impressed by the ground skills his teammate used in a gruesome kneebar finish at UAE Warriors 14 in Abu Dhabi.

Mamedov’s Instagram following of more than 175,000 saw him laugh in his hotel with a chocolate bar and coffee and indulge in a bowl of chocolate ice cream as he celebrated a grueling triumph in which both fighters proved their immense durability.

Islam Mamedov with the knee bar in a bloody state on UAE Warriors. Gruelling vet, reminds us all how tough he is. pic.twitter.com/71OTU3QVNb

Islam Mamedov is a warrior.
#UAEWarriors14

The 30-year-old has been able to temporarily join the promotion under the terms of the suspension of the PFL, which has had its schedule for the year wiped out by the pandemic.

While viewers were shocked by the extent of Mamedov’s cuts and impressed by his resilience, some called for the PFL to also snap up Mezhulmyan for his part in a compelling contest.

“Please sign Martun Mezhlumyan,” wrote one on Twitter. “He just earned it by beating up Islam Mamedov.”

Wow, @MMAProspectscom Prospect to Watch Martin Mezuhlmyan comes up just short in a big step up against PFL’s Islam Mamedov (19-1-1).

After rearranging Mamedov’s face early in the fight and potentially winning the first two rounds, the Armenian was caught by kneebar in the 3rd.

If I’m PFL, win or lose at this stage I’m signing Martun Mezhlumyan. He’s giving Mamedov a hell of a fight here.

Nurmagomedov took center stage at a press conference following the event, which was partly held in honor of his father, Abdulmanap, who died earlier this year.

“The Eagle” spoke in Russian but reassured local reporters: “My dream is to speak Arabic.” 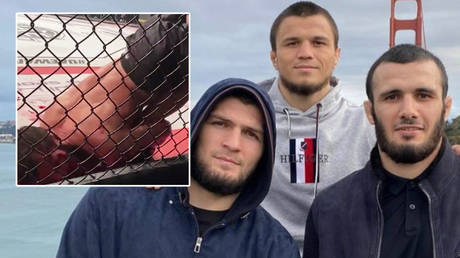