‘Surreal’: Ronaldo & Juventus turn up for NON-EXISTENT Serie A clash after Napoli skip match due to Covid-19 outbreak

‘Surreal’: Ronaldo & Juventus turn up for NON-EXISTENT Serie A clash after Napoli skip match due to Covid-19 outbreak

Serie A champs Juventus’s Allianz Stadium became the setting for surreal scenes on Sunday as visitors Napoli dodged the fixture, leaving Cristiano Ronaldo and his teammates to turn up for a match that was doomed to abandonment.

Visitors Napoli never had a realistic chance of fielding a team for the fixture after 16 of their players and four members of their backroom squad were forced to quarantine because they had come into close contact with midfielder Piotr Zielinski.

The Poland star was confirmed to have tested positive for Covid-19 on Friday, and Napoli interpreted the rules around isolation as meaning that colleagues who had been in contact with him had to stay at home for two weeks.

Napoli were observing rules set out by local health authorities in Naples, although many fans pointed out that the league schedule is likely to have to be abandoned should teams decide to follow their lead.

Juventus players not leaving the dressing room for the warm up training.

A message in the service monitor says: ‘Awaiting arrival of away team’

Music blared out as the floodlights filled the almost entirely empty stadium with light while the Juventus team stayed in their locker room ahead of the scheduled kick-off time, dispensing with their usual pre-match warm-up routine out on the pitch.

League broadcasters Premier Sports confirmed that Gennaro Gattuso’s side were still in Naples as they described “incredible scenes” and accompanied the club badges with the message: “Awaiting arrival of away team”.

“Quite the most surreal spectacle unfolding in Italy right now as Juventus prepare as normal – team bus to the stadium, starting XI posted on Twitter – to face a Napoli team that everybody knows is not going to show up,” wrote Italian football expert Nicky Bandini on Twitter.

“In theory, when Juventus line up and Napoli don’t, the win should automatically be awarded to Juventus. In practice, it’s hard to imagine this thing ending quietly.

“My expectation is appeals and potentially a court process, but that’s just a best guess, really. We’ll see.”

Juventus chairman Andrea Agnelli appeared to suggest that health officials had advised Napoli to make their decision because health protocols around moving players into a bubble had not been meticulously followed.

Warning that “clarity” was urgently needed, he told Sky Sport Italia: “Juventus discovered there were two Covid cases yesterday, so naturally we all went into the bubble so we’d be ready to play this game.”

Agnelli said that Napoli President Aurelio De Laurentiis had told him to postpone the match.

“That can well be a legitimate request but there are some very clear rules and we all have to stick to them,” he added.

“Any industry has its rules and if we don’t follow them, that is an error not just as professionals, but as citizens.

There’s still a lot of misinformation flying around at this point. But both teams appear to be doing what they think they should, following contradicting protocols set by authorities with very different priorities.

In theory, when Juventus line up and Napoli don’t, the win should automatically be awarded to Juventus. In practice, it’s hard to imagine this thing ending quietly. My expectation is appeals, and potentially a court process but that’s just a best guess really. We’ll see.

“It is not up to me to say if the rules need to be changed. All I can do is follow the rules as they are written. The protocol was written precisely for what happens if there is a positive test.”

Luca Stefanini, of Juventus’s medical staff, said: “In this specific case, the moment a positive case is registered, there has to immediately be a bubble imposed.

“That is what we did with the players, staff, medical staff and matchday group.

“There are also the swabs, again as per protocol, which came back negative, and we are therefore able to play the game.

“I do not know if Napoli did the same. I only know that we imposed the protocol and followed it to the letter.” 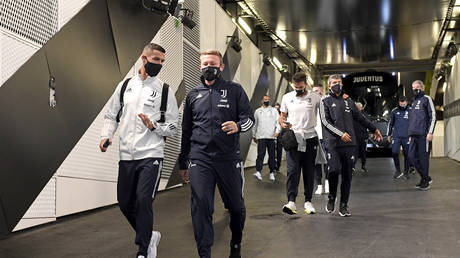 'No one in this team deserves...