‘Support him’: NHL star Artemi Panarin’s model wife reacts after ex-coach’s allegation that he ‘punched 18yo woman to hotel floor’

‘Support him’: NHL star Artemi Panarin’s model wife reacts after ex-coach’s allegation that he ‘punched 18yo woman to hotel floor’

Artemi Panarin’s wife has updated fans after the Russian hockey star paused his NHL career following an extraordinary claim from a former coach that he punched a female teenager to the floor in a hotel bar almost ten years ago.

The three-time World Championships medalist with his country has an $81.5 million, seven-year contract at the New York Rangers, who described the account by Andrei Nazarov, his former boss in the Kontinental Hockey League, as “fabricated” and “unfounded”.

Panarin “unequivocally and vehemently” refuted Nazarov’s words, as well as an allegation that Latvian officials had been “bought off” for $40,000 after a criminal case had been opened.

Rangers’ statement suggested that Panarin had been the victim of an “intimidation tactic” as revenge for social media posts that had been “outspoken on recent political events” in Russia.

Panarin’s model partner, Alisa Znarok, included a Russian flag emoji as she responded to fans asking after his welfare.

“How is Artemi?” she asked her Instagram following of more than 55,000. “Support him. We are with you at this difficult moment.”

According to the New York Post, the allegations were a “spurious attack” on Panarin and a case of Nazarov “going rogue” rather than an organized attempt to sully the winger’s reputation.

NHL expert Larry Brooks said that a spokesperson for the hotel had told a Latvian journalist that the alleged violent incident, which would have taken place when Panarin was a relatively unknown 20-year-old, did not happen, and that no players from his team at the time, Vityaz, had supported the story.

Describing Panarin as “the happiest man on the face of the Earth”, Brooks said that the Blueshirts would struggle without the “universally popular” player who had “carried the club through the first half of 2019-20”.

Having lost their previous four games – the latter two of which did not involve Panarin – his return at the weekend resulted in two wins for Rangers, who now face being without Panarin for an indefinite period. 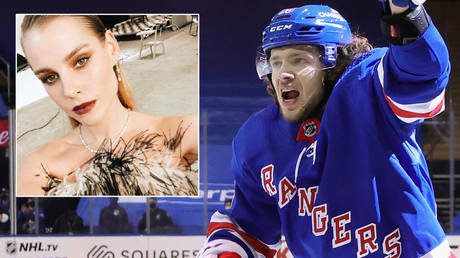