Los Angeles Lakers legend LeBron James has enraged fans by leaving court before the end of his team’s defeat against Miami Heat in the NBA finals, leaving coach Frank Vogel three players short for the final seconds of the game.

James scored a team-high 25 points in the third game against the Miami Heat but was unable to prevent a 115-104 loss that brought the Heat back into the best-of-seven series, cutting a forlorn figure as he was filmed heading back to the locker room.

No NBA team has ever recovered from going 3-0 down to win such a series, and All Star forward Jimmy Butler outshone James with 40 points as his depleted team earned their first win against their opponents.

Lakers stars Rajon Rondo and Kyle Kuzma also left the floor fractionally early in Florida. “I think they thought the game was over,” said Vogel.

LeBron walked off the court with 10 seconds left. pic.twitter.com/zTvwZhHDq5

And this is why Jordan will always be the goat. MJ would’ve never pulled this crap and walked off the court like that.

Well when your teammates play like absolute garbage I would walk off the floor too.

“I don’t think they realized there was point whatever that was still on the clock.”

Unimpressed viewers accused the hugely experienced James of showing a distinct lack of class and sportsmanship by failing to see out the game, with some even suggesting that his arguably petulant actions demonstrated why he was not worthy of being named among the greatest ever NBA players.

“This is why Michael Jordan will always be the greatest of all time,” argued one.

“He would’ve never pulled this crap and walked off the court like that.”

Y’all will find anything to try and tarnish Lebron’s image. They wasn’t going to shake hands after this game anyways so HOW is this making any kind of headline??? Bring this shit up if they lose the series and he walk off smh. SC dropped the ball with this one!

no – you always show sportsmanship

Another said: “Being the ‘greatest’ means the total package, not just in numbers. Attitude counts. Sportsmanship counts.

“Being the leader counts – or acting as a true leader. Being disrespectful to the opposing team does not.”

Apologists for the three-time NBA champion claimed that James’s many critics were over-eager to find fault with him and sympathized with him.

“I don’t know why you all look for any reason to tear down this man’s legacy down,” a fan said.

I don’t know why y’all look for any reason to tear down this man’s legacy down. He walked off the court with mere seconds to go. It’s an 11 point deficit, y’all know Space Jam was just a movie right? He ain’t about to pull some magic trick shot and win!

That’s why people don’t always enjoy LeBron. At least Jordan went to shake everyone’s hands at the end even if he got his ass kicked. Stay on the court and be respectful. He’s done this his whole career. Idk what it is with him and just leaving before the game ends

“He walked off the court with mere seconds to go. It’s an 11-point deficit. You all know Space Jam was just a movie, right? He ain’t about to pull some magic trick shot and win.”

A hardened NBA lover reflected: “That would never happen back in the 80s and 90s, when I grew up watching basketball.

“They were actually men back then and wouldn’t do this sh*t. Embarrassing.”

Asked whether he had walked off because of frustration or losing track of time, James replied: “Both.”

Being the “GOAT” means the total package, not just in numbers. Attitude counts. Sportsmanship counts. Being the leader counts – or acting as a true leader. Being disrespectful to the opposing team does not.

This is one big difference between MJ and @KingJames MJ would never walk off just because he was losing. Super poor sportsmanship on the highest stage.

He called Butler “phenomenal”, adding: “He did everything that they needed for him to do tonight and he came through big time in a big-time game.”

The Lakers lost all four quarters and now face the prospect of the Heat leveling the series unless their form improves in Tuesday’s fourth game between the teams.

“I think we realized that we belong,” beamed Butler.

“They can be beaten as long as we do what we are supposed to do.” 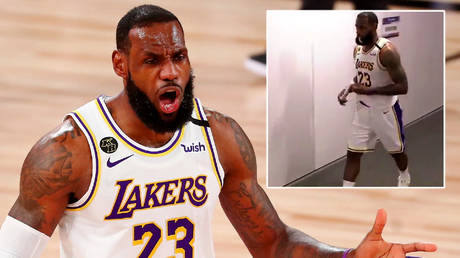