Cristiano Ronaldo and his girlfriend Georgina Rodriguez are certainly easing back into post-lockdown life after the pair posted photographs form aboard a €16.5 million yacht ahead of CR7’s game with Lecce on Friday.

Ronaldo has made just three appearances for Juventus since football’s resumption from its coronavirus hiatus but he certainly waisted little time in seeking out some down-time after opting to take a romantic break with Rodriguez.

According to reports from Italy, the pair visited the coastal town of Viareggio before spending the night in a hotel in Forte dei Marmi – and judging by the photographs, the two lovebirds enjoyed every second.

One picture shows the world famous footballer lying side-by-side with Rodriguez, who captioned the photograph: “The only thing I like more than you, is us.”

Another shows the 26-year-old Argentine model posing seductively on the deck of the multi-million euro vessel.

However, detractors may point out that Ronaldo may want to spend more time getting back to match fitness after what was described as a lacklustre return to the football after his extended break.

Ronaldo has taken part in three games so far since the Italian football restarted, with Juve boss Maurizio Sarri admitted that his star forward “lacked sharpness” after losing the Coppa Italia to league rivals Napoli.

The 35-year-old star did however find the net from the penalty spot in his last outing as Juve won 2-0 against Bologna.

Ronaldo’s fans will no doubt note that the luxurious yacht contains its own gym amongst its top-of-the-line facilities – with more than a few of them no doubt hoping that the five-time Ballon d’Or winner hasn’t been neglecting his fitness. 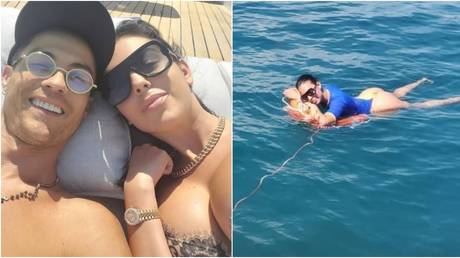