Russian rhythmic gymnastics star Aleksandra Soldatova has wowed fans with her flexibility, demonstrating her jaw-dropping skills while riding a paddleboard.

“Summer time. Let it be in full swing,” Soldatova wrote alongside the image posted on her Instagram page.

The four-time world champion showed herself extending her legs into a split position while standing on her hands, earning admiration from her social media followers.

Soldatova is one of the top athletes in Russia who was expected to battle for a place on the Olympic team to compete in Tokyo.

However, the sports star-turned-social media influencer recently revealed her battle with eating disorder bulimia, which she has been struggling with for the past two seasons.

Soldatova hopes to recover from the illness and earn one of the two Olympic spots to represent Russia at the Tokyo Games next summer.

In the meantime, she has been showcasing her talents on social media, posting mind-bending clips of her flexibility at home and out in public. 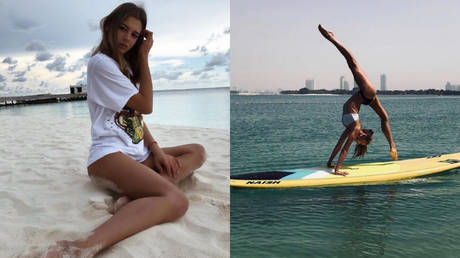