Russia’s Timur Valiev was considered to be one of the best bantamweight fighters outside of the UFC prior to his debut at UFC Vegas 7, but his first UFC fight ended in disaster as he was TKO’d by fellow debutant Trevin Jones.

Valiev’s original opponent Mark Striegl was forced off the card just days from the event, forcing the UFC to draft in late replacement Trevin Jones.

It meant that Valiev went into the fight as a prohibitive favorite with the oddsmakers, who expected him to register an emphatic victory on his octagon debut.

When the action began, it looked like Valiev would deliver as advertised as he started fast and showcased his vast arsenal of strikes to dominate the opening exchanges.

That dominance nearly resulted in a first-round finish as Valiev badly hurt Jones with a front kick to the body, then followed up as his opponent folded up and went to the mat.

But, despite his opponent looking close to being finished, Valiev couldn’t find the crucial strike to force the referee to step in and end the contest, and somehow Jones battled through and survived the round.

Then, in Round 2, the unthinkable happened.

As Valiev pushed forward looking to pick up where he left off in Round 1, Jones unloaded a colossal right hook that landed flush on Valiev’s chin and sent him crashing to the canvas.

Valiev attempted to scramble out of danger, but was too hurt to escape as Jones unloaded some big ground strikes to force the second-round TKO.

It was a huge upset for the Guam fighter, who handed Valiev only the third defeat of his MMA career. 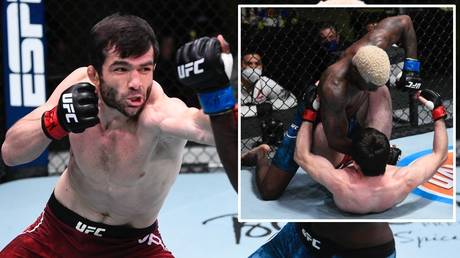