Russian contender Andrey Rublev brushed aside the challenge of South Africa’s Kevin Anderson as he registered a routine straight-sets victory to punch his ticket to the fourth round of the French Open at Roland Garros.

Rublev was barely troubled as he cruised to a 6-3, 6-2, 6-3 victory on Saturday to book his place in the fourth round of the Grand Slam tournament.

No. 13 seed Rublev’s victory also gave him revenge over two-time Grand Slam finalist Anderson, who had defeated him in their only previous meeting back in at the 2015 US Open.

Indeed, Rublev’s win at Roland Garros was so easy he didn’t face a single break point as he continued his excellent form.

The Russian won the ATP title in Hamburg by defeating Stefanos Tsitsipas to head into the French Open on the crest of a wave.

And Rublev carried that form through his match with Anderson as he broke the South African’s serve once in the opening set and twice in the next two to secure victory in just 94 minutes.

Rublev will now move on to face either Hungary’s Martin Fucsovics or Brazil’s Thiago Monteiro in the fourth round. 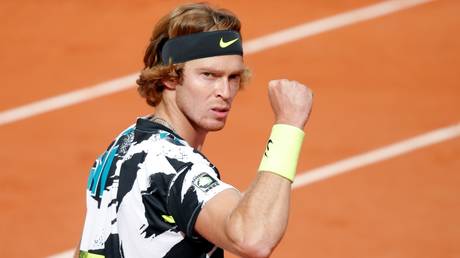