Close
Trending News
HomeSport‘Stop treating him like dirt’: Fans back Nadal as he slams French Open organizers after his quarterfinal win runs until 1:26am

‘Stop treating him like dirt’: Fans back Nadal as he slams French Open organizers after his quarterfinal win runs until 1:26am

‘Stop treating him like dirt’: Fans back Nadal as he slams French Open organizers after his quarterfinal win runs until 1:26am

Rafael Nadal slammed French Open organizers after his quarterfinal win over Jannik Sinner ran until 1:26am, in what was his 100th match at Roland Garros.

The Spaniard’s clash with the Italian was the fifth match scheduled on Court Philippe-Chatrier, and the pair did not even come onto the court until 10.26pm, before starting their match 10 minutes later.

“I know football players plays under these conditions, but it is a little bit different. They are all the time moving. We stop, we come back, we stop on the changeovers. It is a sport that you are stopped in a lot of moments, no?

“I think is little bit dangerous for the body to play with these very heavy conditions. But that’s what happened today. I really don’t know why they put five matches on the Chatrier today.

“That was a risk. I saw immediately yesterday when they sent me the schedule because there is a chance there is a couple of long matches. That’s what happened.”

Prior to Nadal’s match with Sinner, Danielle Collins beat Ons Jabeur in the fourth round, Nadia Podoroska and Iga Swiatek booked their places in the semifinal with wins over Elina Svitolina and Martina Trevisan, respectively, and Diego Schwartzman beat Dominic Thiem in a five-set quarterfinal epic.

The temperature on Philippe-Chatrier – which had its roof open – during Nadal’s match was 13C (55.4F), and the players also had a cold wind to contend with.

Despite the installation of the new roof, night sessions were not planned at the French Open – which is usually held in May and June but was postponed due to the pandemic – until next year and play was supposed to draw to a close at around 9:30 pm.

Fans joined Nadal in calling out the organizers for their decision not to spread the matches across two courts on Tuesday.

“Stop treating him like dirt” cried one particularly passionate Nadal supporter, who said the scheduling was “making a joke of this tournament.”

“Whoever did the scheduling was totally bad at it. Who makes players play in freezing cold at night???” added another, while a third demanded they “learn to organize and schedule the event properly.”

You better believe it! Now stop treating him like dirt when you bow before Federer and Djoko. Nobody should have to play so late. Making a joke of this tournament especially if it affects the next round

Whoever did the scheduling was totally bad at it. Who makes players play in freezing cold at night???

Learn to organise and schedule the event properly

Despite the less-than-ideal conditions and scheduling, Nadal eventually triumphed 7-6 (4), 6-4, 6-1 over his opponent.

Sinner led 6-5 in the first set, requiring Nadal to break back to force a tiebreak, and he managed to break the 12-time Roland Garros champion’s serve in the second, but the ‘King of Clay’ ultimately proved too much for him.

Dancing in the moonlight 🌑@rafaelnadal celebrated his 100th match at #RolandGarros with a straight-sets win over Jannik Sinner 7-6(4), 6-4, 6-1 on Day 10. Watch the best moments 👇 pic.twitter.com/zrVqusOk7e

Nadal will face Schwartzman – who knocked him out of the Italian Open last month – in the semifinal on Friday.

Should he beat the Argentinian and win Sunday’s final, he’ll have 20 Grand Slam titles to his name and 100 French Open victories to his name from 102 matches. 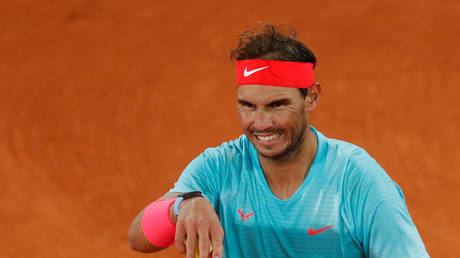