Garcia chatted with Tyson about his recent win against Brit Luke Campbell, who dropped him early in the fight before eventually succumbing to a body-shot KO.

But it was when Garcia brought up the possibility of a fight with Floyd Mayweather protege Davis when things got interesting, as Tyson produced his phone and immediately Facetimed Davis, who engaged in a verbal back-and-forth with Garcia in an increasingly heated exchange.

“Mike, he got dropped by a guy that can’t even hit!” Davis told Tyson, prompting Garcia to mock “Tank” for his short stature.

“Go ahead and hit me with that shot,” Garcia shouted back.

“Look at him. You’re gonna need a Stair Master, boy!”

Davis followed up with a chilling prediction, saying, “Mike, Mike! If I would’ve hit him, you know I would’ve killed him after that.”

Tyson then told Davis he should face Garcia in the ring, and the super featherweight king seemed more than happy to accept the challenge.

Boxing politics make the matchup a tougher than usual bout to make, with Davis fighting under the wing of Mayweather, while Garcia is managed by Mayweather’s longtime rival, Oscar De La Hoya. 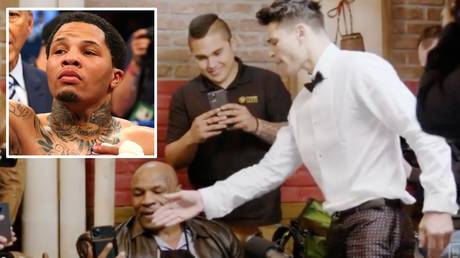