Female stars of the cage and the ring took to Instagram to show off some patriotic attire as they celebrated July 4th with their legions of fans on social media.

Leading the way is one of the most popular female MMA fighters on Instagram, Bellator starlet Valerie Loureda, who posed for a snap in a stars and stripes bikini to commemorate the occasion of her nation’s Independence Day.

The flag-based attire proved to be a popular choice, with WWE superstar Scarlett Bordeaux also opting for the stars and stripes swimwear in her Instagram post as the wrestler known as “The Smoke Show” lived up to her moniker in a beach shot holding a mini sparkler.

Also getting involved in the spirit was former WWE fan favorite and fitness model Natalia Eva Marie, who shared a pair of eye-catching shots – one studio shot from her archives and one up-to-date photo snapped by the pool in her now-familiar dyed hair.

And former UFC strawweight title challenger Claudia Gadelha showed her love for all things American, as the Brazilian fighter donned a special pair of stars and stripes shorts, bearing the cheeky slogan, “God bless this ass.”

MMA is taking a back seat this weekend on Independence Day, but the one-week gap will give way to a breathless run of events, starting on June 11 in Abu Dhabi as the UFC hosts four events in 14 days on “UFC Fight Island.”

The promotion will then return home to Las Vegas for a packed month of action in August, with four weekend events in the pipeline, plus a quartet of Tuesday night shows as Dana White’s Contender Series makes its return. 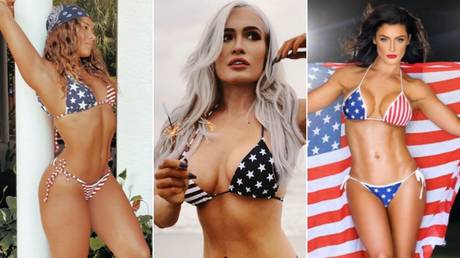