Jon Jones has been teased over his chosen gym soundtrack of a pop hit by Russian-German record producer Zedd, showing off his strength work with a squat of 275lb as he prepares to move up to the UFC’s heavyweight division.

Two-time UFC light heavyweight champion Jones announced that he was vacating his belt at the lighter weight on Monday in order to target the heavyweight division, bringing an end to his reign of more than 18 months after winning the title for the second time in his career.

He explained that his heavyweight goals were “going to take some time” and said there was “little rest on the throne”, making good on those words as he put himself through a demanding test in the squat rack under the watch of a spotter.

Hauling a colossal weight off the rack and onto his shoulders, Jones gradually squatted through gritted teeth before pushing the bar back up and returning it to the bars, looking pleased as he pushed his muscles to their limits.

The music immediately threw me off.

“Slowly but surely,” the 33-year-old told his millions of social media followers, adding: “Tag someone who has a more goofy squatting face.”

While Jones might reasonably have been expected to receive praise for his efforts, many of his viewers chose to mock his choice of song for his gruelling feat, which was soundtracked by worldwide chart hit ‘The Middle’.

“How in hell do you work out to that song, bro?” asked one mystified observer, while another concluded: “Best MMA fighter on the planet.

“Worst taste in music in the known universe.”

The baddest man on the planet @JonnyBones controls the music. Nobody is gonna step up to change the station.

Comment section better not be bashing that song.. that 💩 go hard!!

Best MMA fighter on the planet. Worst taste in music in the known universe.

Jones laughed and called one watcher who told him to “step up that soundtrack game” a “jerk”, agreeing with another who praised the song by insisting: “That sh*t slaps.”

He has been known to enter the Octagon to rap numbers including 50 Cent’s ‘God Gave Me Style’, Nelly’s ‘Hot in Herre’ and Jadakiss’s ‘The Champ is Here’, as well as the rockier ‘We are the Champions’ by Queen.

Before sharing his grind at the gym, the American had paid tribute to Chadwick Boseman, the star of film ‘Black Panther’ who died from cancer on Friday.

“Thank you for your excellence,” Jones said, paying tribute with a photo and animation of the 43-year-old. “Actor and hero.”

Jones last fought when he successfully defended his former crown with a unanimous decision victory over Dominick Reyes at UFC 247 on February 8. 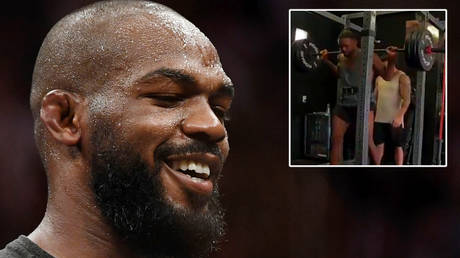 Electric ships are pushing the bou...