Russian football giants Spartak Moscow are being investigated over concerns they breached Covid-19 rules by allowing too many fans into their stadium for Saturday’s clash with bitter rivals Zenit St. Petersburg.

Spartak and Zenit met in the Russian capital at the weekend in a top-of-the-table match which ended 1-1.

The hosts have since faced concerns that they breached Covid-19 protocols by allowing too many fans into the stadium for the showdown with their heated rivals from the north.

“The attendance for the for Russian Premier-Liga (RPL) match Spartak-Zenit caused concern among the state authorities. To clarify all the details, the RPL is working with Spartak as the host team and with the Russian Football Union,” read a statement by the league, reported on championat.com.

🖥 Behind the scenes of the game against Zenit is here!

The celebrations from Ponce, the great play from@alexkralcz and the incredible support of our fans 🔴⚪

Under coronavirus protocols approved by Moscow mayor Sergey Sobyanin, from August 1 clubs were allowed to fill stadiums to 50 percent capacity, and from September 26 were allowed to admit away supporters to make up 5 percent of that number.

However, the need to comply with social distancing rules in reality meant that the number of fans would be restricted to considerably less than that in most cases, and would be more like 30 percent of capacity.

Spartak said the official attendance at Saturday’s game at their Otkritie Arena home was 17,150 – less than half the venue’s maximum capacity of around 45,000.

“I have no reason to believe that the official attendance statistics are incorrect. I think everything should be fine, no problem,” said Spartak general director Shamil Gazizov.

Spartak versus Zenit – jokingly dubbed ‘El Klassikov’ in some quarters – is one of the most anticipated fixtures in the Russian calendar, and brings together the biggest club from the capital against rivals from the north who have asserted themselves as the nation’s most successful club in recent seasons.

There is added spice at executive level as Zenit are bankrolled by energy giants Gazprom while Spartak are owned by billionaire businessman Leonid Fedun, who sits on the board at Lukoil.

The draw keeps both teams at the summit of the Russian league table on 21 points from 10 games, with Zenit ahead by virtue of goal difference.

Zenit, who will also be in Champions League action this season, are aiming to retain the Russian league title they have won in each of the past two seasons under manager and former player Sergey Semak. 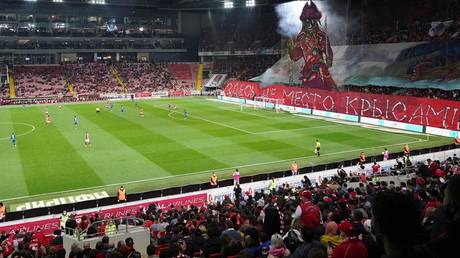