La Liga club Cadiz have responded to the opening of the Spanish FA’s investigation into alleged racist conduct from their defender Juan Cala.

On Sunday, before the conclusion of a 2-1 win for the top flight new boys, Cala was accused of calling Valencia’s Mouctar Diakhaby “a sh*tty black”.

Then, at a press conference aimed at clearing his name, Cala claimed that he had actually said “leave me in peace”, and professed his innocence before threatening to sue anyone that had defamed it.

RFEF, the Spanish FA, revealed on Wednesday that it opened an investigation into the matter.

While no additional details were provided, Cadiz immediately responded to the action.

“With the confirmation of the start of disciplinary proceedings against Juan Cala by the Competition Committee at the request of the Department of Integrity of the RFEF and on the basis of a complaint filed by Valencia CF, Cádiz CF would like to make the following statement,” a post on its official website began.

“We are entirely in agreement and applaud the RFEF for opening an investigation into the accusations that have been levelled at our player Juan Torres Ruiz ‘Juan Cala’,” it continued.

“We expect and trust that, for the good of football, the investigation will be completed in its entirety.

“[And] if, as we fully expect, the investigation is completed with the conclusion that an unfair accusation was made against our player Juan Cala, [we expect] the same investigating body, following the same criteria, [to] must take those measures necessary [so] that those who have made accusations without any proof are sanctioned.”

💛💪 From Cádiz our message is pretty clear pic.twitter.com/ZsAZVqGqsc

“Cadiz CF will defend its players against any kind of unfounded accusation, just as, had the case been the other way around, the club would have condemned and taken action against any conduct contrary to sporting values and the values of Cádiz as a club. STOP RACISM,” it concluded.

With Valencia already stating they “don’t believe” Cala, they also vowed to “fight to the end” to see him punished. 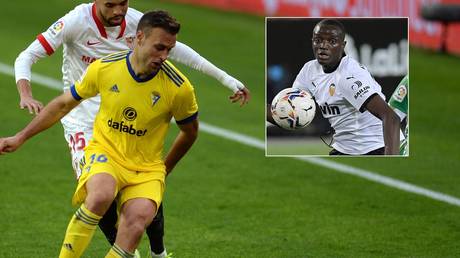