Pop star and former ice-dancer Anna Semenovich has hailed Russia’s national school of figure skating as “unrivaled” and claims that quad-jumps in ladies’ singles events are an integral part of the sport’s development.

Semenovich is a well-known singer in Russia and the former soloist in the extremely popular girl band ‘Blestyashchiye’. But few know that before switching to show business Semenovich was a talented ice-dancer who dreamed of Olympic medals until a knee injury spoiled her plans.

In an exclusive interview with RT Sport, Semenovich talked about her career and split with partner Roman Kostomarov. She also weighed in on a number of issues, including raising the age limit in women’s skating and the influence of quad-jumps on kids’ health.

She was introduced to figure skating by her parents in a bid to cure her arthritis, which forced a young Anna to spend several months in hospital. Her coaches initially didn’t think she would developed into a top-class skater, but Semenovich’s stamina and determination to win finally made her one of the most promising ice-dancers in the country.

“I started skating at the age of three. I was diagnosed with a serious illness – rheumatoid arthritis – which kept me in hospital for several months,” Semenovich told RT Sport.

“In order to avoid serious complications, doctors recommended my parents introduce me to sports. My father wanted me to become a skier, but eventually I went to a figure skating school, though the coaches didn’t want to accept me because I was very small compared to other kids in the group. But my father convinced them to let me in, saying that I would skate just for health reasons, but not compete.

“By the age of nine I had become one of the best skaters in that group despite no one taking me seriously. I really didn’t like the state of things and I was really motivated to prove that I wasn’t the ‘lame horse’ in the group.

“So when I turned 10, I became one of the top skaters in the group and my coaches passed me on to the legendary specialist Natalia Dubova, who had coached brilliant skaters including Marina Klimova and Sergei Ponomarenko, Alexander Zhulin and Maya Usova, Evgeni Platov and Oksana Grishuk.”

Semenovich said that being an artistic skater and passionate dancer, she preferred ice dancing to other figure skating disciplines.

“I have always been artistic. I was very flexible and danced very well, probably because of ballroom dance classes, which I also took. So, at the age of 10, when skaters choose disciplines to compete in, I was immediately picked up for ice dancing by my coaches,” Semenovich said.

Talking about her split with partner Roman Kostomarov, who eventually won the 2006 Olympic gold medal with another skater, Tatiana Navka, Semenovich said she wasn’t hurt by the decision to part ways.

“There can be no insults and offences in sport. Sport is really tough and athletes should realize what risks to take. Of course when I started to have troubles with my knee Roman decided to get back with his previous partner Tatiana Navka with whom he won the Olympic Games. I couldn’t train at full strength due to my knee injury to become an Olympic champion. Those who want to reach that level should take tough decisions sometimes. I completely understood his motive, there were no hard feelings,” she added.

Semenovich, who is an International Master of Sports, said she was not surprised by the recent controversy surrounding Alexandra Trusova’s split with famed pundit Eteri Tutberidze, adding that the decision to switch to another coach has always been accompanied by a scandal if it involves a top class skater. In May, Trusova quit Tutberidze’s camp, causing outrage in the Russian figure skating community with some specialists even labeling her a ‘traitor’.

“It has always been a highly publicized event, when a famous athlete decides to change coach. When Grishuk and Platov left Dubova to work with Tatiana Tarasova it was also a huge scandal. But then they became Olympic champions. Every athlete wants to achieve good results. He or she needs to train in the appropriate surroundings to help win medals for our country. That’s why sometimes athletes need to take tough decisions to develop and conquer new heights,” the retired skater said.

Talking about one of the burning issues in modern figure skating – raising the women’s age limit – the show business star said she can’t understand the general consensus that the ladies’ event has always been ‘young’ in terms of the competitors’ age.

“I’m not the one to decide whether the age limit should be raised or not. But I think that 15-year-old girls are already mature enough to perform at senior level. What does it mean? Someone can have kids at a young age, but skaters are not old enough to win Olympic medals? These are double standards.

“Why is no one talking about Tara Lipinski who won the world championship at 14 years old? Why does nobody remember Oksana Baiul who claimed an Olympic gold at the age of 16? This has always been a young event, I don’t understand why people started talking about the age limit now,” she said.

Responding to criticism voiced by some foreign pundits regarding ‘inhumane’ methods of training children, Semenovich said that children themselves want to win medals, even without being pushed hard by their coaches.

“Why has Russian figure skating school been criticized? This is a legendary school which is truly unrivaled. Nobody is torturing kids at training. A kid either goes to a skating rink, or not. Children want to achieve high results themselves.

“It is quite normal that female skaters have started to land quads. Some time ago we were amazed by triple jumps. ‘Oh my god, this skater threw a triple Salchow!’ But now, this is just a triple Salchow which can be easily done by eight-year-old kids. This is called progress. 100 years ago planes didn’t fly, but now we treat them as something normal. Soon skaters will start landing quintuple jumps, this only means that the sport is developing,” the former skater said. 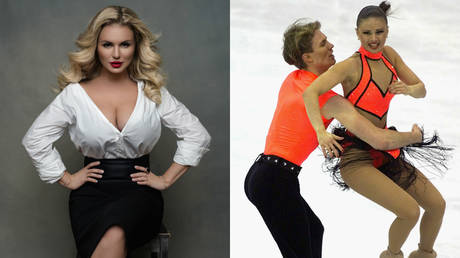