Russian world silver medalist long jumper Daria Klishina says her focus is firmly on sport but she could consider occasional modeling projects after retiring, revealing that she’s shocked by some of the Instagram offers.

In an interview with RT Sport, the blonde star explained why she decided to leave Russia for the US, also touching on her potential modeling plans and the fast-growing social media popularity which has seen her receive some shocking offers on Instagram.

“I started receiving modeling offers when I was probably 14. I was skinny and tall, so the perfect type,” Klishina said.

“But I wasn’t interested so much because I was already involved in sport and it was more interesting for me than a modeling career. But now I’m working with some sponsors and they require me to do some photo shoots. I like it, because it’s a different experience for me.

“Why not? If I finish my professional career and have enough time to do whatever I want, I can also do it. It’s clear I’m not 18 years old or 14 years old, when they usually start their modeling careers. But I already have a good base, because I’m a professional athlete, I have a good story and I think people will be interested in it. So why not,” she added.

The 29-year-old, who currently resides in Atlanta, Georgia, said the Covid-19 crisis has not only significantly altered her training schedule, but has also changed her lifestyle – with Klishina preferring to stay at home while she is free from training.

“I’m training but it’s not my regular training routine, because I’m not doing practice at the track right now. I do my practice only in a gym, and I do a pool workout. I don’t have any competitions this summer season, and I’m just trying to stay active.” Klishina said.

“Some people from our group are practising, because they might compete in August or September, if there are some competitions, but you never know. Because the situation, it’s getting better here in Atlanta but, for example, in Florida and Texas the number of cases is growing again. So it’s kind-of a second wave.“

The European indoor champion said she’s “not getting bored at home,” entertaining herself by reading, cooking and working on social media content, which she takes a professional approach to.

“This is just a time of social media and you just have to kind-of follow these rules,” Klishina said.

“I’m trying to be more active on Instagram. Actually it’s difficult for me, because it’s a big deal. If you want to have a good picture, you have to find someone who’s going to take a picture of you. Some people want to see videos from my training for example, but sometimes it’s just impossible because I don’t go to the track to take videos or photos of myself.

“For me it’s a lot of work as well, it also takes time. Because people want to see beautiful pictures or good quality videos or some interesting content. So really you have to work before you post something. It’s not easy, that’s why I have my friend who helps me with that,” she added.

The Tver native complained, however, about the negative side of social media, recalling a shocking episode when she was offered to become an escort in the US. The jumper stressed that an unknown man messaged her several times on Instagram, even after she’d declined the proposal.

“It was through social media, but it was an actual offer. And they asked me more than twice. I’m trying to check my direct and I’m trying to read some messages, because sometimes I can get GOOD offers. I was a little bit shocked. The reaction was like ‘Really?’ Am I the type of person who you can text with such an offer. Of course I said ‘no’,” Klishina recalls.

Talking about her decision to leave Russia for the US, Klishina said it was a difficult step to make, but she needed a career-changing move to improve her results on the athletics circuit.

“It was a difficult decision for me. When I got an offer the first time to go and train in the US, I said ‘no.’ I thought I wouldn’t feel comfortable there, and I didn’t speak English,” she said.

“But then in one year they asked me again. And that time I knew that I had to change something in my life just to improve my results. They invited me to come to Florida to try to train there for two months. It was really nice, I didn’t feel uncomfortable, the coach was really nice, even though I didn’t speak English.

“I spent so much time embarrassed because I couldn’t explain something, but they were so friendly and welcoming and after two months I said yes, I want to go [to train in the US].

“When I came here I started doing private English classes, I did it three times a week. I had my classes at 7am, before my first practice and I’m not a morning person, it was so difficult for me to wake up. But it was necessary for me to learn a new language because I had to speak, at least to my coach.”

Klishina, who usually keeps her private life close to her chest and off social media, shared her dreams about family life with RT Sport, revealing that she wants to have at least two kids.

“I don’t talk about my private life a lot, because this is just part of my life that I’m trying to keep private,” she said.

“But I’m a woman first of all and then I’m a professional athlete, and of course I want to be a good wife and mom. I’m an only child and I was dreaming about having a brother and sister when I was young. That’s why I want to have two kids at least, because I think for kids it’s really good to grow with your siblings, a brother or sister. These are my thoughts about family life.” 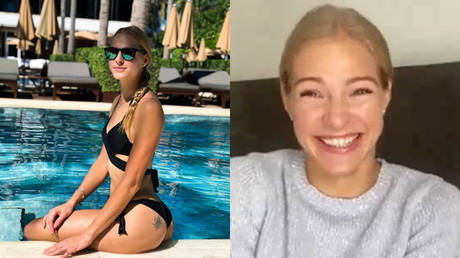