Close
Trending News
HomeSport‘Sometimes I switch on the actress inside me at competitions’: Evgenia Medvedeva on possible post-ice acting career

‘Sometimes I switch on the actress inside me at competitions’: Evgenia Medvedeva on possible post-ice acting career

‘Sometimes I switch on the actress inside me at competitions’: Evgenia Medvedeva on possible post-ice acting career

Russian figure skating star Evgenia Medvedeva has said she could have become an actress given that she plays multiple roles while showing her programs on the ice.

The two-time world champion revealed that sometimes she behaves as a professional actress, hiding her stress and anxiety from spectators and judges.

“If I had practiced it since childhood, I think I could have succeeded [in acting.] Due to my mixed blood [Evgenia’s father is Armenian] I’m a very emotional personal, my life is really very colorful. If I train a lot, I think I could learn how to show emotions by the command, ‘Action!’” the skater said.

“Sometimes at competitions I have to pretend that I’m completely cool-headed, but actually it’s quite the opposite. Often you face some unexpected situations: you may have a high temperature or have pain, then I need to switch on the actress in me,” Medvedeva added.

The 20-year-old figure skating ace is preparing for the new season, during which she will aim to earn one of the three spots on the team to represent Russia at major international starts.

Last season she failed to make the team, having withdrawn from the national championship due to problems with her skates. 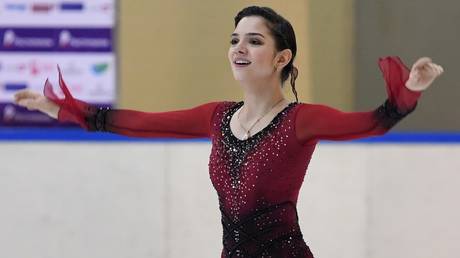