Mike Tyson has been filmed running along a beach, lifting weights on the sand, hurling a cage around and smashing a surfboard ahead of a meeting with Jaws, likening his shark contest to the fear of a ring return at the age of 54.

Tyson will take on the deadly giant shark as part of the annual Shark Week on the science and nature channel, when the former heavyweight boxing champion will test his skills in the latest part of a ring comeback that is expected to culminate in a lucrative fight next year.

While it is not clear how Tyson will face the predator, the likelihood is that the channel will use CGI techniques similar to the technology used to organize a race between legendary swimmer Michael Phelps and a number of sharks for the campaign in 2017.

Phelps had a fin attached to his back but did not swim in the water at the same time as the sharks in an ocean off of South Africa, where his speed was compared to the creatures over different distances in a race that the Great White narrowly won.

“I took on this challenger to overcome fears I still deal with in life,” explained the ‘Baddest Man on the Planet’, who wore a snorkel, goggles and an inflated duck float around his waist in the promotional video for the challenge.

“I equate this with overcoming my fear of getting back into the ring at 54 years old.”

The bizarre video shows Tyson admitting: “Shark Week is hard, man. Whew – someone is going to get bit.”

One of Tyson’s sons, Amir, was among those offering support to the returning veteran, writing: “I see you, dad. Beast mode.”

Tennis ace Patrick Mouratoglou, who coaches Serena Williams and teamed up with Tyson to promote his Ultimate Tennis Showdown tournament last month, told the boxer that the stunt was “amazing” and “so fun”, and former foe Lennox Lewis offered a series of clapping and laughing emojis in response.

Discovery announced Mike Tyson will take on a shark during shark week. You should note before betting that Iron Mike has bitten more people than this shark has.

Ex-UFC champion Henry Cejudo declared that “Uncle Mike can kill anything”, but critics called out what they perceived as a lack of respect for the Great White.

“Discovery getting Mike Tyson to fight a shark for Shark Week is absolutely the nail in the coffin for this f*cked company pretending they care about animals,” said one.

Another poked fun at Tyson’s infamous disqualification for biting when he met fellow great Evander Holyfield, who is rumored to be his opponent for his comeback, in 1997.

“Discovery announced Mike Tyson will take on a shark during Shark Week,” they said.

“You should note before betting that Iron Mike has bitten more people than this shark has.” 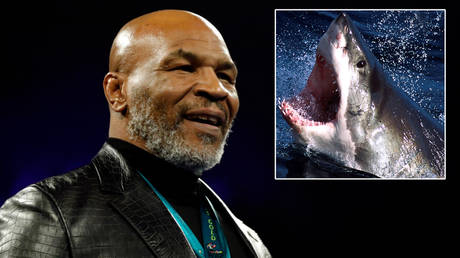 ‘If someone had to die it should b...