Close
Trending News
HomeSport‘Someone was FOLLOWING me’: Misery for axed Russian UFC fighter as his luxury Lexus is STOLEN after return from Fight Island

‘Someone was FOLLOWING me’: Misery for axed Russian UFC fighter as his luxury Lexus is STOLEN after return from Fight Island

‘Someone was FOLLOWING me’: Misery for axed Russian UFC fighter as his luxury Lexus is STOLEN after return from Fight Island

Released UFC fighter Khadis Ibragimov has endured more pain since falling to a fourth straight loss in Abu Dhabi, suffering a raid on his car by a thief who he believes had eyed the vehicle while he had been away for his fight.

Two-time European Sambo champion Ibragimov had only just returned from his stay on the UFC’s “Fight Island”, where he extended his run of defeats with the promotion, when his two million ruble ($26,000) Lexus was stolen from outside his house in Saint Petersburg.

The robbers struck a day before news of Ibragimov’s release by the UFC emerged following his unanimous decision defeat to newcomer Danilo Marques at UFC 253.

Ibragimov said he was making no assumptions after alerting police when he discovered that his car had been swiped at some point between 9.30pm and 12.30pm the following day.

“I understand that someone was following me,” the light heavyweight told 78.ru.

“I was away for nine days. Apparently, during this time, my car was ‘worked on’.”

Officers have launched a search for the criminal and car after examining CCTV footage that is said to have shown a mystery individual approaching the car and activating the alarm before stepping inside and driving off.

There have been a number of similar incidents in the city in recent weeks, including the theft of a Hyundai Genesis two weeks ago and the arrest of two thieves in their mid-30s who were suspected of stealing a Toyota Land Cruiser and a Land Rover.

The suspects in that case, who are based in nearby Vsevolozhsk, were found to have 11 sets of state car registration plates, 41 sets of car keys, devices for stealing cars and starting engines and documents for various vehicles at their homes.

Ibragimov had held high hopes of securing his first UFC win before his underwhelming defeat to Marques in a fight that offered little excitement.

He had shared a video of UFC president Dana White backstage ahead of the card headlined by Paulo Costa and Israel Adesanya, showing the promotion boss hyping the fight that began the bill on Yas Island.

“[He] thinks my fight will be the Fight of the Night,” the Russian told his following of almost 11,000 on Instagram.

“I will try not to let him down. It is very nice that he loves my fights.”

Interspersing his words with clips of Ibragimov punching Ed Herman during his previous defeat by decision in November, White had declared: “If you have not seen Ibragimov fight, you cannot miss this.

“He comes out with an insane pace each and every time, with this ‘live by the sword, die by the sword’ mentality that always produces incredible action.

“With the aggressive nature of both of these guys, this might end up being an early contender for Fight of the Night.”

Ibragimov had won all eight of his professional fights before joining the UFC, including four consecutive stoppages for the Saint Petersburg-based M-1 Global in 2018 and 2019. 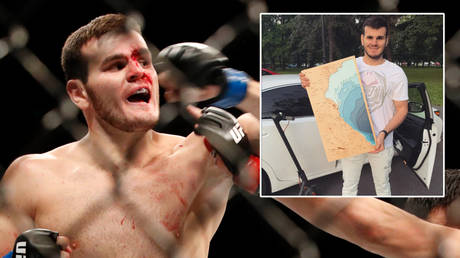