Novak Djokovic has faced accusations of sexism on Twitter after he failed to include women’s tennis legends Chris Evert and Martina Navratilova when describing his rivalry with Rafael Nadal as the biggest in the sport’s history.

Ahead of his defeat to Nadal in Sunday’s French Open final, which was the pair’s 56th career meeting, Djokovic said theirs “is the biggest head-to-head ever in the history of the sport.”

The Serbian failed to account for Evert and Navratilova’s iconic rivalry, which saw them face one another no fewer than 80 times in their illustrious careers.

However, while the American’s reply appeared to be somewhat tongue-in-cheek, some fans were heavily critical of the world No. 1.

“Perfect tweet. [Djokovic] is super sexist as usual,” wrote one, while another asked: “Oh, Djokovic forgetting the women again?”

“Not really a surprise he tried to launch a new organization of pro players without any women,” added another fan, in reference to the breakaway players’ association he formed that initially did not include female players.

One Twitter user drew a distinction between Djokovic and vocal feminist Andy Murray, to which Navratilova reacted positively.

Andy Murray would have corrected him, too. 😊

Djokovic has courted controversy when discussing women’s tennis in the past.

In 2016, the 33-year-old suggested male players deserve more prize money than their female counterparts, just hours after disgraced Indian Wells CEO Raymond Moore said female players “ride on the coattails of the men” and that if he “was a lady player, I’d go down every night on my knees and thank God” for Nadal and Roger Federer.

He was also questioned after his new association did not include women, although he later said female players would be included and has spoken to the likes of Serena Williams and Sloane Stephens about joining.

In this instance, though, his sin was apparently not clarifying that he was talking about men’s tennis, sparking the SJW brigade into action.

Women’s icons Evert and Navratilova were utterly dominant for more than a decade in the 1970s and 80s, winning 18 Grand Slam singles titles between them, and 60 of their 80 meetings came in tournament finals. 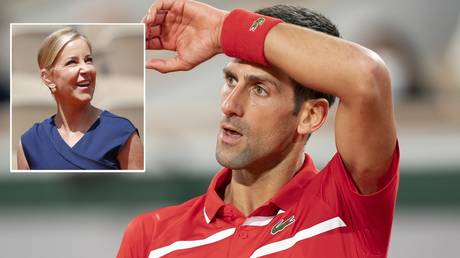