UFC lightweight champion Khabib Nurmagomedov has raised fans’ hopes that he could yet return to the octagon despite announcing his retirement, as the undefeated Russian shared an image of himself with a USADA testing kit.

An emotional Khabib stunned the MMA world last month when he announced he was walking away from the octagon following his second-round victory over interim champion Justin Gaethje at UFC 254 on Fight Island in Abu Dhabi.

READ MORE: Emotional Khabib explains he promised his MOTHER he would retire after UFC 254 (VIDEO)

But since making the announcement – which Khabib explained was based on a vow to his mother that he would no longer continue in the absence of his later father and trainer Abdulmanap – fight fans have been given glimpses of hope that The Eagle could yet return for one final fight in the quest to extend his unblemished record to 30-0.

The latest such hopes came when Khabib posted a picture to his 25.7 million followers on Instagram of himself with a US Anti-Doping Agency testing kit.

“This is 47 times since 2015, as I have been tested for doping of Usada. Just think about this number,” wrote the 32-year-old Dagestani grappling phenom.

Assuming the picture is recent, it would suggest that Khabib has yet to officially inform the UFC of his retirement, as the rules state that “athletes who have not formally notified UFC of their retirement, or otherwise ceased their contractual relationship with UFC, shall remain subject to the requirements of an athlete in the UFC Registered Testing Pool (UFC RTP), including the obligation to submit to doping control upon request.”

The post certainly got MMA fans’ hopes up online.

Wait, you are still in the testing pool even if you are retired?

Don’t do that, don’t give me hope.

Given the recent rancor over Khabib’s claims to MMA GOAT status and the furious response that elicited from light heavyweight legend Jon Jones, a fellow candidate for the accolade, many fans took the opportunity to mock Jones and his own patchy history with the US anti-doping authorities.

Jon jones has left the chat

& unlike other fighters you’ve never hid under the cage 😂

UFC boss Dana White has been among those to signal that we have not seen the last of Khabib in the octagon.

“I’ll tell you this, and I haven’t told anybody this yet, but Khabib and I have been talking,” White told Zach Gelb on CBS Sports Radio at the end of October.

“He was completely emotional that night when he got through that fight. I have a feeling that he might go for 30-0.”

“I think that he’s not going to retire. His dad wanted him to get to 30-0, and I think he wants to honor his dad’s wish.”

Khabib’s latest post will add fuel to the fire of those rumors. 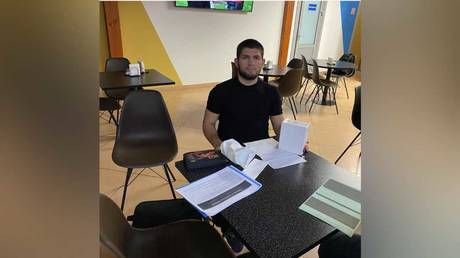