Speaking during an interview with IFLTV, Matchroom Boxing chief Hearn aligned his views with a tweet from pro fighter Ramala Ali in which she claimed female fighters couldn’t expect equal pay unless fans supported the shows which they headlined.

Nevertheless, Hardy steamed into the boxing guru, interpreting his comments to mean he placed the onus solely on women fighters to build their own careers, despite Hearn speaking to promote a women’s world title fight triple-header at Wembley Arena this weekend.

“This is so abusive – he’s literally saying ‘girls, this is on you.’ How FUCKING dare he,” Hardy screeched on Twitter. “How many of his men did he give this speech to? Sorry. Won’t let this go. Fucking gross Eddie Hearn do BETTER.”

This is so abusive – he’s literally saying “girls, this is on you.”

How FUCKING dare he. How many of his men did he give this speech to?

Brooklynite Hardy is a 22-1 standout of women’s boxing, having held the WBO female featherweight title before losing it to Amanda Serrano last September, and has also ventured into mixed martial arts and posted a 2-2 record in the sport, mainly with well-known promotion Bellator. The 38-year-old has long campaigned for women’s boxing to receive the same coverage and financial support as men.

Despite seemingly getting her wish with a trio of female headliners on one card at the UK’s biggest boxing venue, Hardy nevertheless greeted the news and the opinion of a fellow female fighter with as much venom as a spiteful left hook. 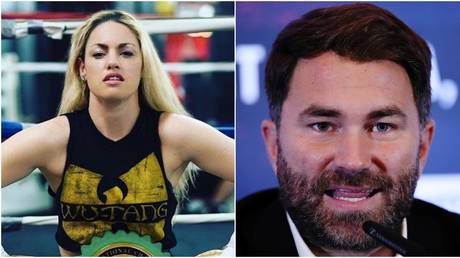