Smoking hot: Kazakh bodybuilder who married his sex doll wants to add fake vagina to an ashtray he’s fallen in love with (VIDEO)

Smoking hot: Kazakh bodybuilder who married his sex doll wants to add fake vagina to an ashtray he’s fallen in love with (VIDEO)

A ‘savage’ Kazakh bodybuilder who hit the headlines for marrying his sex doll has fallen in love with a large ashtray he saw in a club, lauding its “brutal scent” and “the touch of metal on my skin”.

Yuri Tolochko wants to add a fake vagina to a hole in the black receptacle, which he swooned for during a photoshoot little more than nine months after marrying a sex doll in a touching ceremony.

The hulking pansexual 36-year-old has filmed himself sniffing and cradling the ashtray, although the half-naked beefcake explained that he could not show all of its contents and his “caresses” because of rules imposed by Instagram.

“This is a big ashtray in a smoking room in a club,” explained the randy lover of sex dolls Lola and Luna.

“At first, I just arranged a photoshoot with it. But then it began to attract me. I wanted to touch it again, smell it.

“I love its brutal scent, the touch of metal on my skin. It’s really brutal. I also like that it has a story, that it’s not new, that it has served many people and continues to serve them.”

Tolochkin, who variously describes himself as a “savage”, “muscleman” and “athlete” who is “hotter than hell”, says he has persuaded the owners of the ashtray to let him explore the relationship privately.

“A couple of days ago, I was allowed to be alone with it during it off-hours,” he revealed. “I really liked it. I want to ask them to give it to me sometimes at night.

“It will look great in my harem – my babies will be happy. Lola and Luna will support it.

“However, I don’t want to buy a new an ashtray or that they give it to me forever. I want it to continue to work, to benefit people. I love this story.

“I can also insert an artificial vagina in the tube into the hole. What do you think about it? And how will they let me be its boyfriend?”

His ashtray romance is not the only thrill Tolochkin has shown off recently to his vast following of more than 108,000 on the social media platform, many of whom will be looking forward to updates on his latest burning desire.

After relaxing in a park after a paintball session in a tiny pair of blue pants on Tuesday, Tolochkin shared a clip from a club on Wednesday in which sex doll Luna was part of his saucy act for the first time.

“Luna has earned her first money,” he reported in footage that showed Tolochkin sidling up to the horizontal doll and removing a sheet from atop the flame-haired, stilletto-wearing mannequin.

Alas, the proponent of “surreal sexuality” again had to tell viewers that the footage had been cut short due to censorship – directing fans to his Telegram channel to witness the full performance.

Tolochkin issued a call to arms to his followers alongside his first photoshoot with the ashtray last month, when he placed the object between his open legs while topless.

“I want to reach out to people who consider themselves beautiful,” he said, writing after a fan told him they were sad about the prospect of being perceived as ugly.

“Please do not offend other people – do not tell them that they are fat, ugly. You have no idea how much it hurts them.

“Don’t just do this because you are lucky to be beautiful. You’re just in luck – appreciate it.

“I also want to tell people who consider themselves ugly: believe in yourself. Very often you are very nice, sincere and it is good to be with you.

“In fact, you are also beautiful – just once for some reason you decided otherwise. F*ck all the beauty templates.

“I’ll tell you that as a child I was often teased; people laughed at me. I was a pretty boy but I didn’t know it.

“However, over time, I believed it – and you can believe. Know that your inner beauty is important to me.” 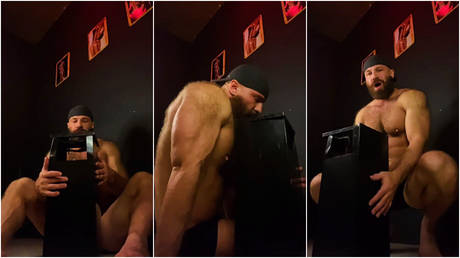 No evidence that Ivory Coast'...