Sliding doors: Usman and Masvidal NARROWLY AVOID each other as welterweight rivals prepare to fly to Abu Dhabi for UFC 251 (VIDEO)

Sliding doors: Usman and Masvidal NARROWLY AVOID each other as welterweight rivals prepare to fly to Abu Dhabi for UFC 251 (VIDEO)

The fighters involved in this weekend’s UFC 251 event are beginning to arrive in Abu Dhabi for “UFC Fight Island,” and rivals Kamaru Usman and Jorge Masvidal were in closer proximity than even they realized ahead of fight night.

Usman and Masvidal both live and train in Florida, and the pair traveled separately to Las Vegas for pre-flight COVID-19 tests and to check into a period of isolation ahead of their charter flight to Abu Dhabi.

It appears the pair will jet to “UFC Fight Island” aboard the same plane, and the pair almost bumped into each other during their Vegas hotel check-in as the pair narrowly avoided what would have been an awkward pre-fight meeting.

Usman is bidding to make the second successive defense of his UFC welterweight title, while Masvidal plans on adding the official undisputed UFC championship belt to his one-off “BMF” belt, won when he stopped Nate Diaz at Madison Square Garden at UFC 244 last November.

In the first episode of the UFC’s “Embedded” documentary series, we catch up with former UFC featherweight champion Max Holloway, former strawweight queen Rose Namajunas and women’s flyweight starlet Paige VanZant as they hop on their flight from the States to Abu Dhabi.

There’s also some behind-the-scenes shots of the UFC’s operation in the US and in Abu Dhabi, as the promotion has put a remarkable set of procedures in place to ensure the event goes off safely.

UFC 251 is the first of four events set for Yas Island in Abu Dhabi, with the quartet of shows scheduled to take place over 14 days. The first is undoubtedly the biggest, however, with three title fights scheduled on a star-packed card this Saturday night. 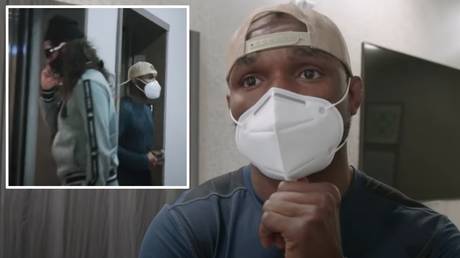