Sky Sports were forced to apologize on Sunday after pundit Graeme Souness used a racial stereotype in his criticism of Erik Lamela for his part in an incident which led to Anthony Martial being sent off.

The Frenchman was controversially dismissed in Tottenham Hotspur’s 6-1 win over Manchester United for lightly slapping the Argentinian in the face – in response to the Spurs man putting an arm in his – which resulted in Lamela dropping to the ground.

And if the referee’s criterion was that, then Erik Lamela also got a red card. The Argentine started, Martial responded. Yellow for both and to continue, but the referee preferred to exaggerate.
pic.twitter.com/dT8xtRN9z4

An angry Souness, who managed Benfica between 1997 and 1999, said of the incident at halftime: “If Martial is going then Lamela has to go. He raises his hands, Martial lashes out, it’s like a tickle across your chops and he’s gone down.

“It is pathetic. It’s very Latin. If one goes, both have to go. It’s pathetic. Is this what the English game is about? We, the Brits, do it differently. I’ve played in a Latin country, I’ve worked in Latin countries, I know how they see the game.

“Lamela will sleep well tonight thinking he has done a great piece of work for his team. That is not us.”

At the end of Sky’s broadcast, which came after Aston Villa’s 7-2 thrashing of Liverpool in the final game of the day, host Dave Jones issued an apology for the comments.

“Now I have to say before we go, earlier in the show we were critical of Erik Lamela’s part in Anthony Martial’s sending off in the Manchester United-Spurs game.

“We’d like to apologize for any offence that was caused and the stereotyping of the Latin culture.”

Former Tottenham player and manager Osvaldo Ardiles, who won the FIFA World Cup with Argentina in 1978, expressed his displeasure at Souness’ comments on Twitter: “I take exception to the ‘Latin’ comment of Graeme Souness about Erik Lamela. Stereotyping all Latin football players in this way is grossly unfair. It would be the same as saying that this so called tackle represents the ‘British’ way. Which it doesn’t.”

I take exception to the “Latin” comment of Graeme Souness about @ErikLamela Stereotyping all Latin football players in this way is grossly unfair. It would be the same as saying that this so called tackle represents the “British” way. Which is doesn’t.

It’s not the first time this season that Sky Sports have had to apologize after an ill-advised comment was made by one of their pundits. 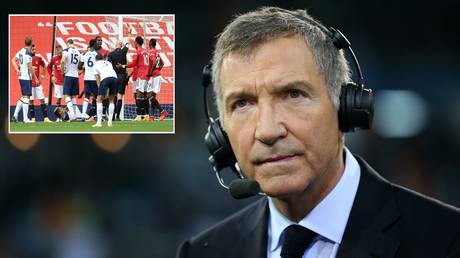