Seemingly intent on imploding its own little world of irony, the quest for social justice has succeeded in having the Tour de France podium girl hostess tradition changed to instead feature more men… all in the name of equality.

The 2020 edition of the most prestigious event in the cycling calendar will see not two attractive, moderately-dressed female hostesses flanking the yellow jersey-sporting winner on the podium, as per tradition, but instead one hostess and one male host.

Winners of the 23-day race have customarily been joined by a female hostess positioned on their right and left, along with five elected officials on one side and five representatives of the sponsors on the other.

Tour director Christian Prudhomme announced at a press conference on Wednesday that the competition is simply following the lead of other races which feature the same combination, such as the Liege-Bastogne-Liege in Belgium.

“Now, it will be different, with only one elected official and one representative of the partner of the yellow jersey, as well as a hostess and a host for the first time,” Prudhomme said. “Yes, it’s new but we have already been doing it in other races for 20 years, like in Liege-Bastogne-Liege.”

But wokeness has recently taken pole position in the cycling world and radical feminists have long contended that placing woman on the podium is sexist and called for the traditional hostess duo to be scrapped in favor of a more equal alternative.

It turns out rendering professional women working in sport redundant and replacing them with more men is their masterplan to mete out social justice. Go figure.

Last summer, 38,0000 disgruntled women’s rights campaigners signed a petition to do away with the “sexist tradition” of two glamorously but modestly dressed women handing bouquets and jerseys to the winners of one of sports most iconic events, capped off with a polite peck on the cheek.

“Women are not prizes, rewards or sexual objects. They are athletes and their place is on the podium as sportspeople and not as rewards,” was the ‘Tour de France: Get rid of podium girls!’ war cry.

Quite why decimating the number of woman in sport is considered the answer to promoting equality has unsurprisingly raised a few finely-plucked and carefully-crafted eyebrows.

Podium girls are undoubtedly chosen in part due to their glamorous appearance, being selected from local women in the city where the race takes place with the simple criteria of being under 30 and around the same height as each other.

However, they also face draining working days beginning sometimes around 6am, meaning hours standing on high heels on the end of long toned legs, as well as being required to possess a certain degree of linguistic ability.

Once chosen, girls can earn up to €2,000 ($2,227) for a fortnight’s work, which includes free food and hotel stay, which is a rather attractive gig if you’re lucky enough to get it. Not all women can be top-class athletes that end up on the podium themselves wearing lycra instead of long dresses, so why snatch away the opportunity to get there using other physical talents and be well paid while they’re at it in favour of a man?

In a carbon copy of confused political correctness, last year an Australian boxing promotion sucker punched a group of ring girls out of a boxing match just minutes before their ring entrance after they were accused of “objectifying women” by feminist groups, much to the dismay and disappointment of the professional models simply hired to carry out work at a sporting spectacle.

Their replacement? The ridiculously sexed-down role of male ‘fight progress managers’. In other words: a well-dressed man denied a group of otherwise willing women their livelihood.

Due to the efforts of the very same perennially-offended, inclusivity-instead-of-intelligence SJWs, Formula 1 grid girls were also binned, putting to bed an entire industry exclusive to women in what seems like an endless effort to do away with female fixtures on the periphery of sport.

Having just one hostess on the Tour de France podium instead of two might seem like a trivial change, but it again highlights the irony of the aimless SJW mission that seeks to eliminate any perceived hint of patriarchy to the extent it replaces women with a less suitable, less experienced man in a suit simply based on his gender – the very notion they claim to be battling against. 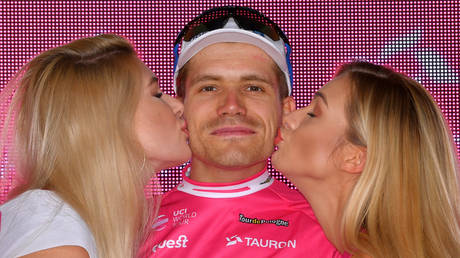