Close
Trending News
HomeSportSister act: Shevchenko aims to step from the shadows and show her skills as submission sensation Lipski aims for top at UFC 255

Sister act: Shevchenko aims to step from the shadows and show her skills as submission sensation Lipski aims for top at UFC 255

Sister act: Shevchenko aims to step from the shadows and show her skills as submission sensation Lipski aims for top at UFC 255

Much of the talk around Antonina Shevchenko’s fight on Saturday has focused on her family affair, fighting on the same bill as revered UFC champion sister Valentina in the first UFC event to feature two sisters on the bill.

Shevchenko’s opponent, Lipski, is one of the few female fighters who can rival her fanbase, helped by a headline-grabbing win earlier this year when she beat Luana Carolina with an excruciating-looking kneebar in a submission of the year contender.

This time out, Lipski and Shevchenko both have a point to prove as they look to establish their credentials as legitimate contenders andin the process answer critics offering withering appraisals of their recent records.

Shevchenko’s hundreds of thousands of fans know her as much for the enthusiasms she shares with her younger sibling, including weaponry and flying planes, as her fighting prowess.

Yet to provide a convincing UFC performance, she might envisage staying at range and securing a likely points win through her stronger striking abilities as her most evident path victory in the Octagon.

Five months ago, when Shevchenko’s striking had been expected to cause problems for Katlyn Chookagian, the flyweight number two capitalized on her wrestling flaws on the way to a unanimous decision win.

Chookagian was hardly noted for her ground skills before her win, which laid bare the deficiencies that her victim has been concentrating on in training.

“I’ve worked on everything,” said Shevchenko.

“In MMA, you cannot just say, ‘I am world Muay Thai champion – I don’t need good wrestling or grappling.

“Even if you’re good at everything, you could lose. We have been trying to get better at everything – my striking also needed to be sharper.”

Lipski aiming for the summit

Nine years Shevchenko’s junior, “The Queen of Violence” knows that a win would offer a significant show of intent as she continues to recover from a stuttering start following her switch to the UFC last year.

“This fight is a very good challenge in my career,” said the understated Brazilian. “Antonina is a good name to fight. She is the sister of the champion with a similar game.”

Her early encounters have raised major questions over Lipski’s potential to compete at the top of the division. The win that preceded her victory over little-known Carolina was a much-needed stroll against an opponent ranked outside of the top 100, Isabela de Pádua.

The three-time KSW champion looked outclassed in her opening two bouts for the promotion, providing comfortable points victories for Joanne Calderwood and Molly McCann, but she believes that those were important learning fights.

“I expect to win this fight very clearly, by KO or submission,” she has boldly predicted of her scrap with Shevchenko. “After that, I’m going to the top.”

Having only relaunched her professional MMA career in 2017 following a trio of early wins more than a decade ago, Shevchenko is a relatively fresh face in the flyweight division, albeit an instantly-hyped one thanks to her family connection.

Nevertheless, at 35 and having lost two of her last three fights, the decorated Muay Thai champion cannot afford to lose to Lipski if she is to step at least some way out of Valentina’s considerable shadow.

“She’s tough, aggressive, strong,” Shevchenko said of Lipski. “I just need to be the same or more aggressive than her.”

Shevchenko will aim to use her experiences against Roxanne Modafferi, Chookagian and Lucie Pudilová – all tougher tests than Lipski’s most recent opponents – to prevent Lipski from successfully walking her down.

Lipski’s blueprint for victory was underlined by Modafferi, whose grappling skills led to Shevchenko’s first professional defeat when she lost on a split decision in St. Petersburg in April 2019.

That weakness, allied with Lipski’s eye-catching conclusion to her clash with Carolina, makes for a potentially entertaining contrast in styles.

“It was a very different submission because it was a counter-attack – I don’t know if it was the best submission of the year,” laughed Lipski. “But for me, it was.”

Lipski’s husband and coach, Renato da Silva Jr, has described her as a “complete athlete” coming into the contest.

“He’s making me a very good fighter,” she said. “Next year is going to be my year.

“The training camp for this fight was so hard but I feel so good and strong for this fight. Don’t blink, because I can finish the fight as soon as you think.” 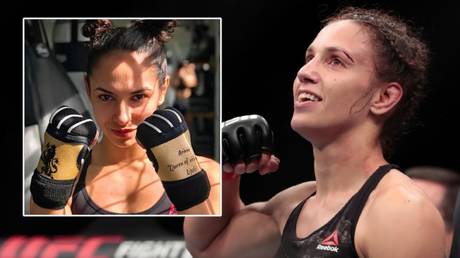