Close
Trending News
HomeSport‘Sir Alex, this one is for you’: Cristiano Ronaldo issues emotional first post since completing return to Man Utd

‘Sir Alex, this one is for you’: Cristiano Ronaldo issues emotional first post since completing return to Man Utd

‘Sir Alex, this one is for you’: Cristiano Ronaldo issues emotional first post since completing return to Man Utd

Cristiano Ronaldo has made a first post to his legions of social media followers after completing his return to Manchester United, paying special tribute to his former mentor Sir Alex Ferguson in sealing the deal.

“Everyone who knows me, knows about my never ending love for Manchester United. The years I spent in this club were absolutely amazing and the path we’ve made together is written in gold letters in the history of this great and amazing institution,” Ronaldo wrote in a post to his 336 million Instagram followers after his move from Juventus.

“I can’t even start to explain my feelings right now, as I see my return to Old Trafford announced worldwide. It’s like a dream come true, after all the times that I went back to play against Man. United, and even as an opponent, to have always felt such love and respect from the supporters in the stands. This is absolutely 100% the stuff that dreams are made of!

“My first domestic League, my first Cup, my first call to the Portuguese National team, my first Champions League, my first Golden Boot and my first Ballon d’Or, they were all born from this special connection between me and the Red Devils. History has been written in the past and history will be written once again! You have my word!

“I’m right here! I’m back where I belong! Let’s make it happen once again!”

In a special nod to former manager Alex Ferguson – the man who brought Ronaldo to Old Trafford as a teenager in 2003 and moulded him into one of the best players on the planet – the Portuguese star added: “PS – Sir Alex, this one is for you…”

Ferguson, 79, is still said to be a father figure for Ronaldo and reportedly played a key role in convincing the Portuguese icon to make a return to Old Trafford, where he will join the team now managed by Ole Gunnar Solskjaer.

During Ronaldo’s first spell at Old Trafford, he helped United to a hat-trick of Premier League titles with Ferguson at the helm, as well as winning the Champions League in Moscow in 2008 and his first Ballon d’Or accolade.

United confirmed the completion of transfer earlier on Tuesday, with Ronaldo, 36, joining on a two-year deal with the option of a third year. 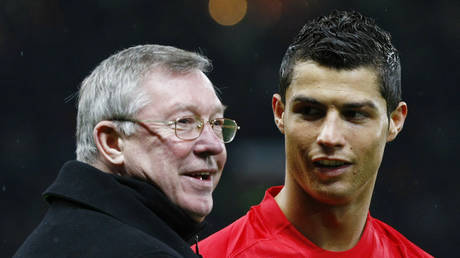