Chelsea have confirmed the arrival of Thiago Silva as the latest part of their summer spending spree, bringing in the Brazilian center-back as a free agent after he left French Champions League finalists Paris Saint-Germain.

Silva, 35, called time on his PSG after the Champions League final defeat to Bayern Munich after playing more than 300 games for the French club.

The Brazilian is expected to add some much-needed guile to a Chelsea backline which shipped an alarming 54 goals in the Premier League last season.

Silva has signed on an initial one-year contract with the possibility of another season on top of that and becomes the second third defender to join the club in a matter of days following the arrival of England left-back Ben Chilwell from Leicester City and another free agent arrival, Malang Sarr, who last played for French side Nice.

“I am so happy to be joining Chelsea,” Silva said in comments released by the Premier League club. “I am delighted to be a part of Frank Lampard’s exciting squad for next season and I’m here to challenge for honours. See you soon Chelsea fans, I look forward to playing at Stamford Bridge very soon.”

Silva joins the summer transfer revolution for the Stamford Bridge club which is being overseen by the shrewd eye of director Marina Granovskaia, widely seen as owner Roman Abramovich’s most trusted lieutenant at the Blues.

“We are delighted to be able to add a player of Thiago Silva’s proven world-class credentials to our squad,” Granovskaia added.

“Having performed at the highest level for many years, we have no doubt his experience and quality will complement the many exciting talents we already have here.

“Thiago will be an excellent fit and we hope he can add some new trophies to his impressive list of honors.”

Earlier this week, Chelsea confirmed the capture of Chilwell in a £50 million ($65 million) deal from Leicester City, while this summer has also seen the arrival of winger Hakim Ziyech from Ajax and striker Timo Werner from RB Leipzig, setting the Blues back £38 million ($50 million) and £53 million ($70 million) respectively.

Further business is expected to be announced in the coming days, with the addition of a new goalkeeper thought to be near the top of Frank Lampard’s wish list, but the biggest piece of the puzzle is German midfield wunderkind Kai Havertz.

Chelsea are set to land the highly-rated 21-year-old in a club-record deal which will reportedly set them back £90 million ($118 million). 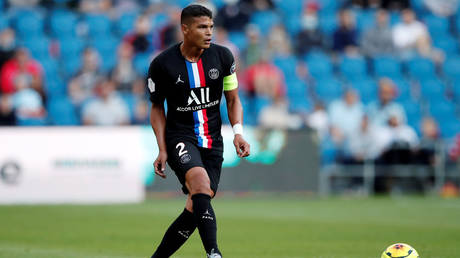