UK boxing journalist Gareth A Davies has been berated online after making the claim that Australian ‘Blonde Bomber’ Ebanie Bridges could potentially be a ‘Muhammad Ali’ for the women’s side of the sport.

Davies, who usually writes for the Daily Telegraph and also features on squared circle coverage by streaming giant DAZN, said as much in a video that was shared on social media Tuesday evening.

“Watch out for Ebanie Bridges,” he warns.

“‘Cause she is potentially a Muhammad Ali for women’s boxing.”

“Because she is a complete free spirit like Muhammad Ali was.”

“She can change the way society sees women boxers,” he predicts.

“The lingerie at weigh-ins. The posing. The total ownership of what her body is and what she’s doing.”

“Watch this space, because she is a fascinating person in the sport of boxing” he signs off.

Though Bridges gave a good account of herself last time out in a WBA bantamweight title fight lost against Shannon Courtenay in April, Davies unsurprisingly got stick for comparing her to the Olympic gold medalist and only three-time lineal heavyweight champion widely-regarded as the greatest boxer of all time.

“Gareth’s a top fella, respect for Ebanie Bridges, more so after her last fight but this is just silly talk!” replied sweet science coach Dave Coldwell on Twitter.

“Despite the huge struggle Jane Couch went through, what [pound-for-pound great] Katie Taylor and even [IBO and WBC super featherweight champion] Terri Harper have done for the women’s game and community you still wouldn’t mention Ali’s name.”

Gareth’s a top fella,
respect for Ebanie Bridges, more so after her last fight but this is just silly talk!
Despite the huge struggle Jane Couch went thru,
what Katie Taylor & even Terri Harper have done for the women’s game & community u still wouldn’t mention Ali’s name. 🙈

“I love you man. But step away from the bar!” said a fellow respected scribe.

“Too many tequilas brother!”

Attempting to get her 5-1 record back to winning ways at the weekend, Bridges will take on 3-9 Bec Connolly at the Matchroom Headquarters.

At the weigh-in on Friday, expect the lingerie stunts Davies speaks of as Bridges has meanwhile promised she is “definitely going for the stoppage”.

I love you man. But step away from the bar! Too many tequilas brother! 😂

“I feel like it’s going to be a heated fight because we both like to get into a scrap, but I’m not going to get drawn into a firefight if I can just box her.

“I’m definitely going for the stoppage, and she’s not somebody who really gets stopped, particularly at 118 lbs which would be the lighter side.”

“It would make a big impact,” Bridges predicted, were she able to pull off her threat.

“Because girls aren’t stopping her and they’re often fighting her without much of a camp at all, so I’m excited to test myself against her with proper preparation.” 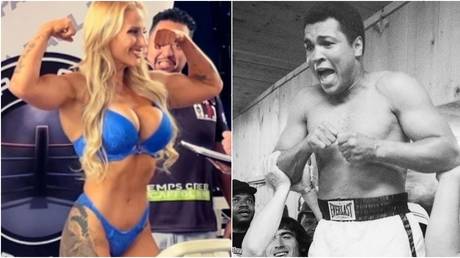