‘Signed my bout agreement like this’: Bellator fan favorite Loureda poses in pink bikini as name & date revealed for next fight

‘Signed my bout agreement like this’: Bellator fan favorite Loureda poses in pink bikini as name & date revealed for next fight

MMA stunner Valerie Loureda has wowed fans with a stunning bikini contract signing snap, as her next opponent and the date of their fight have also been revealed.

The Bellator star uploaded a sensational poolside shot to Twitter which showed her relaxing head down and showing off her body in all its glory.

And naturally, her followers weren’t able to contain their emotions.

Leaving them in no further suspense, details of the 22-year-old’s next appearance in the octagon have now been revealed.

On May 7, at the Mohegan Sun Arena in Uncasville, Connecticut, the Miami native will face Hannah Guy as part of the Bellator 258 card – as reported by Maxim.

While Taekwondo master Loureda has already put together a 3-0 flyweight record with the MMA promotion since debuting in 2019, this will be 2-1 Guy’s debut for them.

All focus will be on Loureda further down the bill, however.

Last year, she was named the hottest fighter of 2020 by ex-UFC middleweight champion-turned-pundit Michael Bisping on his podcast and set pulses alight with a celebratory video.

But as she says herself, she is more than “just an ig model”, and also made the top 10 Bellator finishes in the same year through her savage buzzer-beating KO of Tara Graff.

That victory was marked with a racy cage dance, much to the delight of Loureda’s growing army of fans. 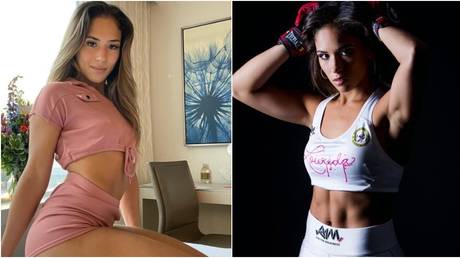