British Olympian Dina Asher-Smith has savaged a UK gym for advertising a “12 Years of Slave” workout program for Black History Month which included the tagline “slavery was hard and so is this.”

The 24-year-old, who won gold over 200 meters at the World Athletics Championships last year, tweeted her outrage at the social media post which advertised the workout at PureGym’s Luton and Dunstable branch.

“I am shocked, hurt and stunned and confused that someone would think it appropriate to use the enslavement and brutal torture of generations of black people to characterise a workout,” she wrote.

“I am in disbelief that somebody thought this was okay. I understand this came from an individual who had gone against corporate protocol and this was not a PureGym sanctioned post or workout.

“Nevertheless, this should not have happened. This is exactly why diversity and inclusion training is so important for all companies and PureGym policies must be tightened so that there is approval over what goes out under their name.

“Black History Month and the Black Lives Matter have shown why we need to have widespread honest and unfiltered education around Black History.

“It is important for everyone to understand why it is so offensive and inappropriate to make this allusion.”

The post from the gym had read: “Entitled ‘12YearsOfSlave’ (after the epic movie) this is our workout of the month designed by @MattSimpt to celebrate Black History Month. Slavery was hard and so is this.”

And just like that Pure Gym is finished pic.twitter.com/UiHlbcLMq1

The sprinter was far from the only one to call out the insensitive post, which was removed from the branch’s Facebook page after a severe online backlash.

PureGym, the second-largest gym operator in Europe with over 1.7 million members and more than 500 gyms, released a statement on Twitter in which they apologized “unreservedly” for the “wholly unacceptable” post and pledged to investigate the matter.

Matt Simpson, the assistant general manager of the Luton and Dunstable branch and the personal trainer who designed the routine, was initially unapologetic.

“I’ve merely taken the name of an Oscar winning film and given it to a workout having the number of exercise coincide with the number in the title,” he wrote in a since-deleted Tweet.

However, he quickly changed his tune as the overwhelmingly negative reaction poured in and offered a groveling apology.

“I sincerely apologise to all whom I offended and angered in any way, shape or form, directly or indirectly. There was absolutely no malice or ill intentions meant by the post. This was a very ill judged post which I am responsible for.

“There are only excuses for it. Only a place from which the post came. Which was from a proud black man wanting to bring his history together with his passion and profession. Unfortunately as a result I have been vilified and branded racist.”

Sometimes words are not enough. Dr Martin Luther King Jr said judge on character. My character is owning this. Judge me on that. pic.twitter.com/hbqwFD6N45

Simpson, a black man, added that he had “never experienced any racial prejudice” at PureGym and any suggestion of the company being racist “could not be further from the truth.” 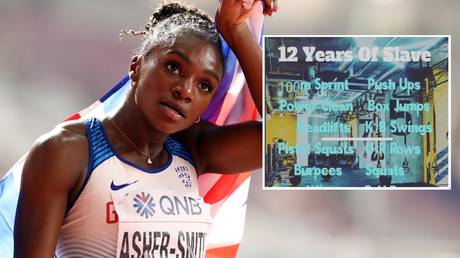