Former South Africa international Anele Ngcongca has died in a car accident at the age of 33, according to reports. The football star is said to have crashed while driving in the province of KwaZulu-Natal on Monday morning.

Ngcongca died at the scene of the crash after being thrown from his vehicle, while a female companion is in a critical condition, according to news outlet eNCA.

Local police did not name the footballer as the victim, but confirmed a crash in the area which caused a fatality.

Our condolences on the untimely passing away of former Bafana Bafana defender Anele Ngcongca, who died in a car accident this morning.
May his soul RIP. pic.twitter.com/dCpxLu47Cz

“At 05:00, a vehicle with two occupants lost control and overturned on the N2 freeway near Mtunzini. A 33-year-old man was declared dead at the scene,” brigadier Jay Naicker said, Goal reported.

“The driver sustained serious injuries and was taken to hospital for medical attention. The circumstances surrounding the incident are still under investigation. A case of culpable homicide has been opened for investigation by Mtunzini SAPS.”

As reports filtered out online of Ngcongca’s passing, tributes began to pour in for the right-back, who played 53 times for Bafana Bafana between 2009 and 2016.

Soccer Laduma sends condolences to family and friends of the departed star and all those affected by his passing. pic.twitter.com/xR3PMLGOy5

What was your favourite Ngcongca moment? 😇 pic.twitter.com/TmXmHfOug0

Videos and photos appeared also purporting to show the scene of the crash, with a white car seen at the side of the road with a badly crumpled hood.

This is a tragic passing 😭
Former Mamelodi Sundowns defender Anele Ngcongca was involved in a fatal car accident in KZN early this morning. Please be safe and observe road safety rules when driving guys 🥺🙏🏾🕊️ pic.twitter.com/6caP6c3aYQ

In another tragic aspect to the story, Ngcongca’s ex-girlfriend, Nomasonto “Mshoza” Maswanganyi, is reported to have died just days earlier.

Cape Town-born Ngcongca initially made a name for himself at second-tier South African team FC Fortune, before moving to Belgium to play at Genk, making over 200 appearances and winning the Belgian league title and two Belgian Cups.

He had a loan spell with Troyes in France before returning to his homeland in 2016 to play for Premier Soccer League outfit Mamelodi Sundowns.

The President, Dr Patrice Motsepe, the Board of Directors, Technical Team, Players, Management, Staff, Supporters of Mamelodi Sundowns FC & the entire Masandawana Family express their deepest condolences to the family and friends of Anele Ngcongca who passed away today. pic.twitter.com/aOI2s4giIg

Just before his untimely death, Ngcongca had reportedly signed for Durban club AmaZulu and was awaiting confirmation of the move. 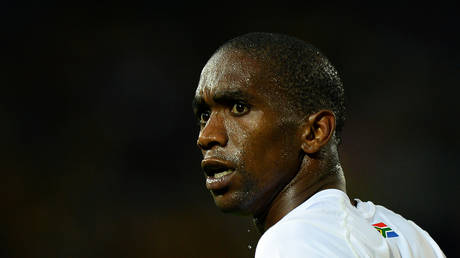