Georgian ‘Shewolf’ Liana Jojua scored her fifth career armbar and her first-ever UFC win when she submitted Dian Belbita in the first round at UFC Fight Night 172 on Fight Island in Abu Dhabi.

It took just 2 minutes and 43 seconds of the first for Jojua to dispatch Canada-based Romanian Belbita, leaving ‘The Warrior Princess’ writhing in agony to improve her record to 8-3 and notch her first ever victory with the UFC.

Jojua made her much-anticipated debut back in September but got taken out TKO by Sarah Moras in the third round, but since moving up to flyweight, Jojua managed her first victory in over two years.

After the fight, Jojua admitted it’s no secret that the armbar is perhaps her favoured method to end a fight, but that she “didn’t intend” to break Belbita’s arm, and so a submission was as far as the move went.

“Thanks to everyone for the congratulations. It’s an important victory for me, I was hungry for the win. Thank to all who helped me in my preparations,” Jojua wrote on Instagram captioning snaps of the win including next to UFC head honcho Dana White.

“I could only train for one month in this difficult period for the whole world. You can’t imagine how much hard work I had to put in for this stoppage in this timeframe.”

Elsewhere on the card, Calvin Kattar beat Dan Ige by decision after five rounds, while Liverpool’s Molly McCann got the better of Taila Santos in a three-round decision. 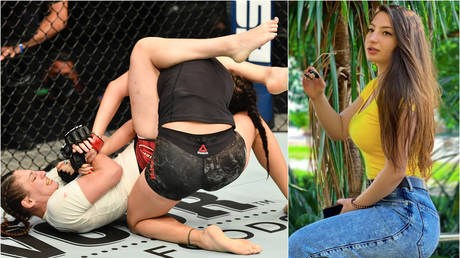