Russian figure skating starlet Alexandra Trusova landed a triple flip and a triple Lutz-triple toe loop on her way to winning over more new fans with victory at a competition in the US.

A week after being hailed by Olympics organizers as the first female skater to land five quads in a routine in a test skates event in Chelyabinsk, the 17-year-old was in Boston to compete at the US International Figure Skating Classic, which featured star performances from the likes of three-time Olympian Michal Brezina.

Masterful Trusova has admitted she has ambitions to win Olympic gold, and the ‘Quad Queen’ showed why in her first competition since joining revered coach Eteri Tutberidze after spending a year under the tutelage of skating great Evgeni Plushenko.

The Ryazan-born sensation managed her triple Axel in the warm-up but fell when she attempted it in her routine, recovering to ease to an eye-catching victory in the short program with a score of 74.75 ahead of the free skate on Saturday.

That was only 0.2 short of Trusova’s personal best and put her comfortably clear of South Korea’s Park Yeonjeong, the surprise runner-up who scored a personal best with 71.07.

“After reading about Trusova’s five-quad free skate and watching the women’s short program at [the classic], my skating brain finally started moving again,” admitted one fan.

“It really sank in: the women’s event this Olympic cycle is going to be insane.

“At the last Games, it was a big f*cking deal that Mirai [Nagasu] landed her triple Axel. This time? Triple Axels. Quads. Everywhere.”

After reading about Trusova’s 5 quad free skate and watching the women’s SP at ACI, my skating brain finally started moving again, and it really sank in: the women’s event this Olympic cycle is going to be INSANE

me about sasha trusova https://t.co/tJLeHFKADD

Most consider it a matter of time before Trusova lands the triple Axel in competition.

“I think maybe Eteri thought she needed more competition experience in terms of trying out the short program layout with the triple Axel and the five-quad free program,” suggested one viewer.

As for Trusova, I think maybe Eteri thought she needed more competition experience in terms of trying out the SP layout with the 3A and the 5-quad FP to gain more confidence in stabilizing the elements? She needs to push past that mental block that’s present whenever she does 3A

Trusova’s red hair is so cute on her. It’s the exact shade I dye mine when it’s red. Lookin like that good good Féria Power Copper.

“[Maybe] to gain more confidence in stabilizing the elements? She needs to push past that mental block that’s present whenever she does the triple-Axel.”

Others were complimentary of the youngster’s red hair and accompaniment from the soundtrack of Disney’s Cruella.

i’m so happy that sasha finally landed a perfect flip, with the right edge!!😭💘

“Sasha Trusova for president of the whole earth,” gushed one typically ecstatic response.

“I’m going to cry – she’s the coolest and craziest person in the world.”

Gabriella Izzo, of the USA, came third, and there was more success for Russia in the rhythm dance, in which Diana Davis and Gleb Smolkin finished second. 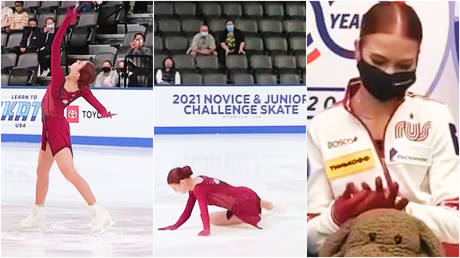