Before the start of the ISU Rostelecom Cup in Moscow, few would have guessed that the 23-year-old Elizaveta Tuktaysheva would beat highly motivated youngsters with her superb technical content.

The uncompromised battle for gold was expected to unfold between quad-jumping prodigy Alexandra Trusova, reigning European champion Alena Kostornaia and Eteri Tutberidze’s brightest star, Anna Shcherbakova, who withdrew from the event at the last moment.

READ MORE: ‘I can have kids at this age’: Russian ‘striptease’ skater Tuktamysheva reveals what she thinks about while landing quads

Tuktamysheva, who has been in the shadow of her younger rivals in previous seasons, proved that a well-calculated balance between technical difficulty and artistry is a real key to success.

She emerged on the international circuit over eight years ago, winning international skating events together with Adelina Sotnikova.

But her dreams of making an Olympic debut were ruined after she lost qualifying events to Sotnikova and Yulia Lipnistkaya, who represented Russia at the home games in Sochi.

She wasn’t broken by this local failure, however. On the contrary, the skater said it gave her extra motivation to prove that she was still among the world’s best competitors.

In 2015, she won the European and World Championships after presenting her newly-acquired element – the triple axel that has become her signature jump.

However, this success turned out to be short-lived, as she was quickly replaced by Russia’s new stars Evgenia Medvedeva and later Alina Zagitova, who won all major international competitions.

Tuktamysheva missed a spot on the Olympic team again, and then rose like a phoenix after the Games, winning several Grand Prix events in a row. She was named the queen of post-Olympic seasons and joked that because of her huge international experience she could be called the ‘babushka’ of figure skating.

Her feminine and mature performance not only pleases the eye, but shows that women’s skating is not just about jumps and difficulty. It’s a spectacle on the ice, a small story that sometimes only an experienced skater can truly interpret.

After many of her renowned competitors retired, Tuktamysheva remains the sole female skater who can fight for podium places against the so-called quad-jumping generation.

She is a true embodiment of elegance and beauty, who proves that a woman’s career in figure skating is not necessarily restricted with two or three years.

Her well-deserved victory in Moscow doesn’t mean she will dominate on the international scene this year, but it definitely shows that it’s possible to win even when you are considered a ‘babushka.’ 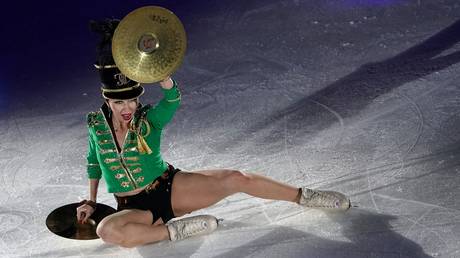