Ex-UFC challenger Chael Sonnen has credited Mike Perry’s girlfriend, Latory Gonzalez, with extending her perfect record as the welterweight’s trainer after she watched on in the shameful ruckus that saw him floor a man in Texas.

Sonnen joined a chorus of mockery and condemnation on social media on Thursday in the aftermath of harrowing footage of hot-headed Perry punching an elderly man to the floor in a restaurant after Gonzalez had been heard encouraging him to leave the venue as tensions escalated.

Gonzalez, herself a former wrestler, was hailed a “queen” by Perry after making her debut as his cornerman in his UFC victory over Mickey Gall last month, although he paid little heed to her attempts to act as peacekeeper in a shocking incident that saw him repeatedly shout the word “n*****” before police were called to the scene.

Fans responded by calling MMA legend Sonnen “dirty” and “the greatest of all time”, as well as questioning his sense of humor and defending Perry, with some arguing that his volcanic response to being “touched” was justified.

Quipping Sonnen was not the only figure from the sport to weigh in on the rumble. Current UFC middleweight Paulo Costa thanked Perry for “opening my eyes” as he sparred with an amateur female in a gym, seeming to question Gonzalez’s Octagon credentials as he asked: “Who needs coaches?”

“Forget that sh*t of fighting in a bar and hitting an old man,” he told his thousands of followers.

“It’s just another normal Wednesday here on my street in Brazil.”

Notoriously outspoken Costa then took aim at former UFC lightweight champion Conor McGregor, who was convicted of assaulting a man in his 50s in a bar in Dublin in April last year, by adding: “It’s completely normal to get drunk and hit old men in Ireland, too.”

Some of Costa’s followers complimented his stand-in trainer on her figure, while others derided the jibe for being made “too soon” as the dust continued to settle on Perry’s chilling loss of temper that reportedly hospitalized his victim.

I really need to thank Mike perry for opening my eyes. Who needs coaches? pic.twitter.com/kA9z94lmHP

The rival middleweight used his Instagram to repost a tweet suggesting that he was responsible for “triggering Mike Perry’s descent into madness” and a joke that repeated a crude sexual threat he made about Gonzalez during a challenge to Perry.

The original remark by Till, in which he pledged to “raw dog” Gonzalez after promising to beat his foe, incited Perry to react with a lengthy expletive-laden rant and declare: “I want to fight Darren Till.

“I want to fight him, then I want to jump out the cage like Khabib [Nurmagomedov] did and jumpkick his mom in the face.”

Neither Perry nor Gonzalez had expanded on an initial “no comment” tweet from the fighter the day after the incident. 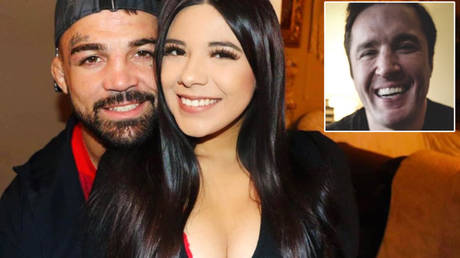