Commenting on Trusova’s sensational free routine, in which she attempted to throw no fewer than four quads, Zhulin praised the skater for her insane technical content, stressing that most male athletes wouldn’t dare include so many ultra-complicated elements in their programs.

The Olympic silver medalist said he was so impressed by Trusova’s performance, and suggested she would have no competition this season, as none of her teammates is capable of landing so many quadruple jumps.

“Today, Trusova has left a powerful impression. She managed to beat her closest opponent by 24 points, even with two noticeable errors. She is a figure skating phenomenon. She skates at the same level as men – maybe even better than them. It’s impossible to beat her if you have just great choreography and artistry,” Zhulin said.

“Alena Kostornaia’s performance was clean, but she lost 24 points. Trusova is the leader in female skating. Yes, Kamila Valieva and Anna Shcherbakova have impeccable skating, and if they demonstrated the same technical content, they’d be able to outscore Trusova. But so far, I haven’t seen any female skater except Trusova who can land four quads in one program. I’m really impressed with her performance,” he added.

The 16-year-old prodigy, who is also the first female skater in history to nail a quad at an international competition, confidently won her second consecutive Cup of Russia stage, qualifying for the Russian championships, where spots on the national team will be at stake. 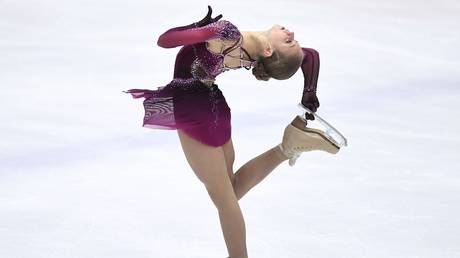