Close
Trending News
HomeSport‘She might kill somebody’: USA coach tells world to ‘give Russia a ton of credit’, lauds 17yo ace after Olympic volleyball mauling

17-year-old Russian star Arina Fedorovtseva “might kill somebody” if she played against high school players, the coach of Team USA’s women’s volleyball team has warned after his side was heavily beaten at the Tokyo Olympic Games.

The top-ranked side in the world were given a shock by the rampant Russians, losing 25-20, 25-12 and 25-19 as they slipped to their first defeat of the tournament.

“If you do the math, she probably would be a high school junior this fall,” the three-time Olympic champion said of the teenager.

“Luckily, she’s not playing against other high school players or she might kill somebody or at least dole out five concussions per match.

”Give Russia a ton of credit: they played a really sharp, clean game of volleyball. Their serving really gave us some trouble. They had a couple of jump spinners who put us in some trouble.”

Playing under the banner of the ROC as a result of a ruling by doping bosses, the winners secured their spot in the quarterfinals with a third victory of the tournament, producing a clip of some of the squad celebrating exuberantly on their team coach.

“We were told after the game that we had not defeated the US team for six years,” suitably satisfied middle blocker Veronika Korolev told the ROC afterwards.

“I’m very happy. When did America lose to anyone like that? This is the team that was famous for its technique, tactics and cleanness. They still made minimal mistakes today.

“At this tournament, the American women have practically not conceded a single ace, and I am very glad to have scored one.”

The Russians lost 3-0 to Serbia in the quarterfinals at the 2016 Olympic Games, and Korolev justifiably feels they can go further this time.

“The minimum task – to get out of the group – we have completed,” she pointed out.

“If we have a better result than in Rio, it will be sweet.” 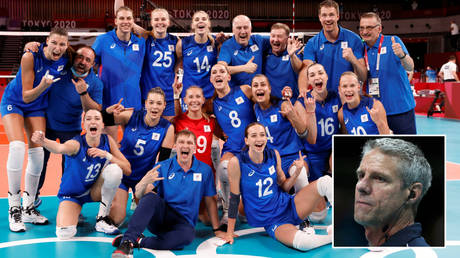 ‘We meant no disrespect’: Israeli...

Andriy Shevchenko ‘grateful’ as he...