Close
Trending News
HomeSport‘She is harsh, but this is the way to win’: Former skater defends Eteri Tutberidze’s methods of training champions

‘She is harsh, but this is the way to win’: Former skater defends Eteri Tutberidze’s methods of training champions

‘She is harsh, but this is the way to win’: Former skater defends Eteri Tutberidze’s methods of training champions

Former skater turned-choreographer Viktor Adonev has spoken out in defense of Russia’s famed coach Eteri Tutberidze, saying she might be tough in training, but she knows how to raise champions.

The coach, who has been working with Tutberidze for several years, described her as a “harsh and demanding” specialist who can find a way to stimulate kids to work harder.

READ MORE: Abusive coach or winner? Why does figure skating supremo Eteri Tutberidze’s dominance trigger such uproar? Or is it envy?

“Some people say that Tutberidze is an awful coach and a tyrant. Well, yes, she is pretty harsh in training, but think this is right. I use similar methods as well,” he said.

“Sometimes you need to make kids do something, especially when they fail [to execute elements]. This is the only way to achieve success. If the coach always pats you on the back, you will never succeed.”

Adonev, who worked with figure skating champion Evgenia Medvedeva when she was a member of Tutberidze’s team, said that he regretted the skater’s departure, adding that she might have learned how to land quads if she had stayed.

“I was really upset when she left Eteri. It was horrible, I think Tutberidze did everything she could for her,” he continued.

“And I’m pretty sure she could have landed quads if she had stayed. I don’t know why she quit Eteri, this is their relationship.”

Tutberidze has become one of the most respected coaches in women’s skating after guiding multiple champions to world (and Olympic) prominence.

She brought revolutionary changes to the sport, raising a quad-jumping generation of skaters who have swept the podiums at all major international events.

Last week, Tutberidze received the “best coach” award from the International Skating Union (ISU) in acknowledgment of her prowess and talent. 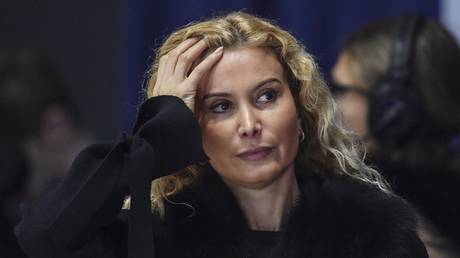