‘She is a MASSIVE fan’: Manchester City star Zinchenko interrupts his WEDDING DAY to defend wife over criticism of boss Guardiola

‘She is a MASSIVE fan’: Manchester City star Zinchenko interrupts his WEDDING DAY to defend wife over criticism of boss Guardiola

Oleskandr ZInchenko has taken time out from his wedding to glamorous sports reporter Vlada Sedan to address uproar over her perceived criticism of Pep Guardiola’s tactics, insisting that she had every right to a forceful opinion.

Last year’s Ukrainian Footballer of the Year distanced himself from scathing comments made by Sedan about Guardiola’s decisions before and during City’s surprise Champions League defeat to Lyon, losing 3-1 to the team that finished seventh in Lique 1 in a dismal finale to their season in Lisbon.

The influential TV reporter in Zinchenko’s homeland had admitted that she “perhaps” had “no right” to publicly lambast Guardiola in the aftermath of the defeat, adding that she suspected her fiance would “forbid” her from being so forthright.

“To put it mildly, in order not to swear, this is completely Guardiola’s fault,” she then unequivocally added.

“At such a crucial moment, using such experimental tactics was a bummer…why play three central defenders?

“I simply have no words because to have such a line-up…look at the players City have, what a bench. Literally only a few clubs in the world can boast having such players as substitutes.”

A former Russian Premier League star with Ufa, 23-year-old Zinchenko joined City in 2016 and has established himself in Guardiola’s plans since returning from a loan spell at Dutch side PSV in 2017, although his only start in the Champions League of an injury hit season came in an opening encounter with Shakhtar Donetsk.

He issued a less brazen critique of his manager’s tactics on Sedan’s YouTube channel, but has now called for calm after her remarks caused controversy.

“Guys, I need to say a few things about this interview,” he told his following of more than a million on Instagram, accompanying a photo of the colorful wedding with a response to the furore on his story.

“First of all, I didn’t say anything bad or judgemental about our tactics, so don’t confuse my words, please.

“I was explaining that we, as players, understand the effect tactics have and how, given we have such great experience, we can adapt to the tactics we are given.

“On the night, we lost to Lyon but that doesn’t mean the manager was wrong to try.

“If you have seen my interviews in the past and the way I talk about our manager then you can believe me. He is number one.”

Zinchenko said the scathing assessment had been driven by passion rather than professionalism.

“Although [Sedan] is a journalist, she is also a fan,” he explained.

“Throughout the season she traveled with us for all of our away and home games because she is a massive City fan.

“In the video, you can see her emotions straight after the game and she gave an opinion like all fans do, because she wanted us to do better.

“We totally understand now that she shouldn’t post it in the social media because she is my wife, but she was not trying to make a journalist’s opinion on the manager of the team.

“She was simply reacting to her disappointment as a fan.

“I’m writing right now from my wedding. Instead of enjoying this unbelievable moment, I have to do this because I can’t skip it and live it like that. I hope you understand.”

Speaking to Sedan about the disastrous defeat, Zinchenko had observed: “We have three central defenders in static position with the ball – they start all attacks, and two central midfielders go down to them to take the ball, because there are no zones to find a pass line.

“We have five people just off the game.”

The exchange is not the first time a high-profile footballer has become embroiled in a row over comments made by their spouse this summer.

In June, midfielder Aleksandar Katai acknowledged that racist social media posts made by his wife, Tea Katai, were “unacceptable”. Katai was subsequently released by the club as a result of the scandal. 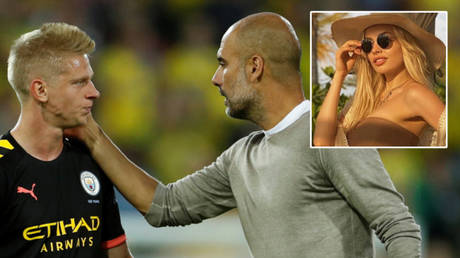 BBC sparks uproar after banning wo...