Mike Tyson’s comeback to the ring appears to be one step closer after the 53-year-old posted the latest of what has become a series of video clips showing the former heavyweight champion preparing for a return to boxing.

Tyson, who last competed in a losing effort to Kevin McBride more than 15 years ago, has made several hints that he is considering a comeback to the sport he dominated for the best part of a decade from the mid 1980’s onward, and has now released another training clip to whet fight fans’ appetites.

The ‘Baddest Man on the Planet’ has suggested that he will end his extended hiatus from the ring this year for at least one exhibition bout aimed at raising funds for charitable causes.

Several names have been mentioned as being potential opponents for a returning Tyson, including those of former foe Evander Holyfield and even his namesake Tyson Fury and, this week, UFC superstar Jon Jones.

Tyson, who turns 54 in a matter of days, has displayed his typical speed and power in the sequence of training montages, showing that his advancing years haven’t yet dulled the tools which took him to the summit of the professional boxing world.

He has also reportedly received a multi-million dollar offer from Bare Knuckle Fighting Championship to compete under their banner, but it is understood that the Tyson isn’t enthused by that idea.

Whether or not the legendary pugilist does make good on his desire to have one last fight remains to be seen, but it doesn’t look like even one ounce of his feared power has left him. 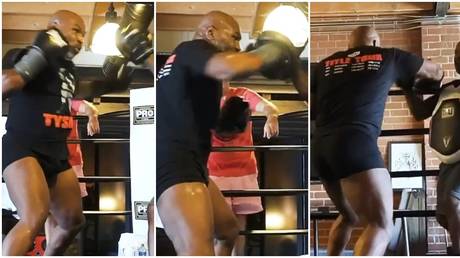