Lewis Hamilton has joined an exclusive list of drivers who have won seven Formula 1 world titles after the Englishman secured his latest championship by winning Saturday’s Turkish Grand Prix.

The win, which was the 94th of Hamilton’s career, was enough to secure the title and place him alongside legendary driver Michael Schumacher as the most successful pair in the sport’s history.

The championship is Hamilton’s fourth in a row and seventh in total since his first win title win back in 2008.

A clearly emotional Hamilton paid tribute to his team immediately following the race, and said that the record-equalling win is the culmination of a lifelong dream.

“I wanna also say a big big thank you to Team LH for sticking with me all these years, and to my family. We dreamed of this when I was young and we were watching the grand prix and this is way beyond our dreams… for all the kids, dream the impossible and speak it into existence … never give up, never doubt yourself.”

7X Formula 1 World Champion. Wow. To everyone that has supported me along the way, this is for you. To my incredible family, where do I even start? I am eternally grateful for your unconditional love, sacrifices and support… https://t.co/Uwb34qzCx2

Hamilton’s victory at a wet Istanbul Park was his latest success in a near-unprecedented spell of success in recent season and comes after he had already surpassed Schumacher’s record of victories last month.

Hamilton began the race at sixth on the grid and after fears that the difficult conditions could potentially delay his coronation as champion, the 35-year-old Englishman surged ahead of his rivals in a performance which displayed Hamilton’s consistent superiority on the racetrack.

He claimed an impressive 10 wins and 9 pole positions throughout the abridged season, claiming the title win three races of the 17-race season remaining – some 85 points ahead of closest rival Valtteri Bottas who, like Hamilton, was driving for Mercedes.

But the day clearly belongs to Lewis Hamilton. Well over a decade ago in the halcyon days of his career, Hamilton had been tipped as a future world champion. Sunday’s checkered flag confirms that those predictions were off the mark; he might just be the best driver that the sport has ever seen. 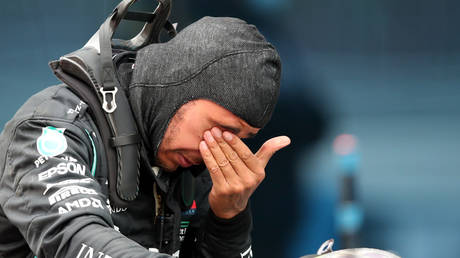