Cristiano Ronaldo scored one and created two more a the Portuguese star led his Juventus side to a resounding 4-0 win over Lecce to extend the Turin side’s lead at the top of Serie A.

Ronaldo had already gone close with a spectacular bicycle kick by the time Lecce’s Fabio Lucioni was sent off just after the half-hour mark as Juve were given the opportunity to commit more players to the attack with their opponents reduced to 10 men.

READ MORE: ‘I belong to the old school’: Buffon’s wife says Ronaldo’s family should DROP social media after his sister hits out at Juventus

The one-man advantage proved decisive, as Juve took the lead five minutes into the second half, as Paulo Dybala found the top corner after being fed by a Ronaldo pass.

Then, nine minutes later, Ronaldo stepped up to slam home a penalty after he had been brought down in the box.

The match saw the return of Argentinian striker Gonzalo Higuain, and the veteran frontman added a third after he benefited from an impudent backheel from Ronaldo with seven minutes to go.

The win puts “The Old Lady” seven points clear at the top of Serie A, with Ronaldo taking to Instagram to hail the performance as an “important victory!” 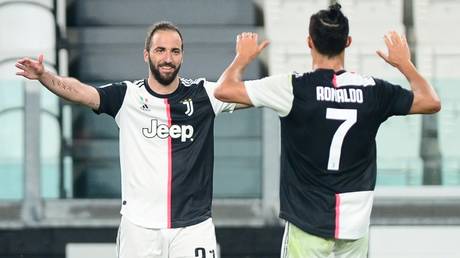