Barcelona president Josep Maria Bartomeu has pledged his support to Quique Setien, saying he hasn’t regretted his decision to sack Ernesto Valverde, and vowed his under-fire coach will remain in his post next season.

Valverde led Barca to back-to-back La Liga titles and were topping the Spanish league table when he was sacked in January, a Bartomeu drafted in Setien as his successor.

The new coach has attempted to transform Barca’s play, but has produced mixed results on the pitch, and a mixed response from the fanbase.

Barcelona’s season has started to come apart at the seams after the side suffered draws against Sevilla, Celta Vigo and Atletico Madrid, while their big rivals Real Madrid have hit form following the La Liga restart.

It means Barca now find themselves four points adrift of Real with just four games of the season to go.

Barca produced an impressive display to earn a 4-1 win at Villarreal on Sunday, and club president Bartomeu said he has faith in his beleaguered coach as he bids to change the playing ethos of the team during a transitional period for the club, despite reports linking Barca with a move to appoint former midfielder Xavi as their new boss.

“At this moment I’m pretty happy with how the team has evolved and in the last couple of games we have seen the improvements Setien has made.

“I don’t regret the decision to sack Valverde, we needed to give the team a boost and Setien has brought new ideas and new sensations with him.”

Setien, meanwhile, said he didn’t feel as if his position was under threat, despite rumblings of discontent and rumors of unhappiness within the squad, including talismanic star Lionel Messi, who has been linked with a move away from the Camp Nou at the end of his current contract.

Speaking to a virtual press conference before his team’s match with Espanyol, Setien said, “I didn’t have the feeling things were going to change, I have gotten used to this circus.

“I just do my job and I get the feeling the board are happy with the work we are doing and so am I.”

Setien also moved to keep his fans onside as he stated that the team is still doing everything they can to overhaul Real and win the league this season.

“Of course we can still win the league, it’s still mathematically possible and we have to keep our hopes up until the last day,” he said.

“We have to just focus on what we can do and try to win while playing well and making progress. And if we cannot win it, we can lay a platform for next season.” 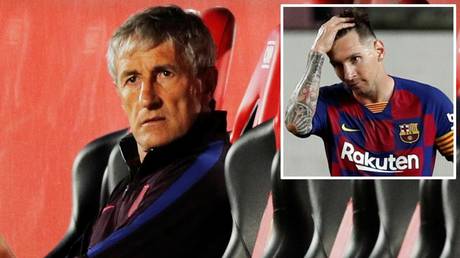 What a Kock up: Cricket South...

Nuclear arms race ‘stupid,’ Beijing will make sure it can destroy US just ‘ONCE’ – Chinese media boss