Novak Djokovic’s remarkable powers of recovery came to the fore once again as the Serb battled back from two sets down to beat Stefanos Tsitsipas in a five-set French Open final thriller.

Making a maiden appearance in a Grand Slam final and becoming the first Greek ever to appear at this stage of a major tournament, the 22-year-old Tsitsipas seemed on course for a shock victory when he opened up a two-set lead over the world number one.

But as many have found out before, Djokovic’s stamina is perhaps the greatest tennis has ever witnessed and the Serb fought back to take the final to a decisive set – the fist time it has gone the distance at Roland-Garros since 2004 – before getting the job done 6-7 (6-8), 2-6, 6-3, 6-2, 6-4 to claim a 19th Grand Slam title.

🙌 A Champion for the Ages 🙌 #RolandGarros pic.twitter.com/fWn6C4ESua

Djokovic, 34, also became the first man in 52 years to win all four Grand Slam titles twice – something neither of his GOAT rivals Roger Federer or Rafael Nadal have achieved.

The last man to register the feat was Australian great Rod Laver in 1969, while Laver’s countryman Roy Emerson achieved landmark two years before him.

Djokovic added to his last Roland-Garros title won in 2016, and is now just one Grand Slam behind the all-time record men’s mark of 20 held by Nadal and Federer.

Djokovic had overcome 13-time French Open king Nadal in a semi-final for the ages on Friday, but that achievement looked like going to waste as fifth seed Tsitsipas opened up a two-set lead with some inspired tennis at Court Philippe Chatrier.

At one stage Djokovic took a nasty tumble as he chased down a drop shot from his Greek rival, with the Serb sliding and then tripping, almost slamming his head into the courtside equipment.

The Serb picked himself up and dusted himself off, and from the third set the comeback was on as a previously dejected Djokovic began to find his rhythm.

Tsitsipas required a medical timeout after seeing Djokovic cut the deficit to two sets to one, a sign of the struggles he was now facing.

Djokovic immediately opened up a double break of serve in the fourth set before seeing it out 6-2, and then made the breakthrough in game three of the decisive stanza to lead the match for the first time.

Tsitsipas battled valliantly and staved off match point, but Djokovic hauled himself over the line – just as he has done so many times before – to get his hands on a second title on the red clay of Paris.

What a tournament 💪#RolandGarros | @DjokerNole pic.twitter.com/BJEXSR8xnj 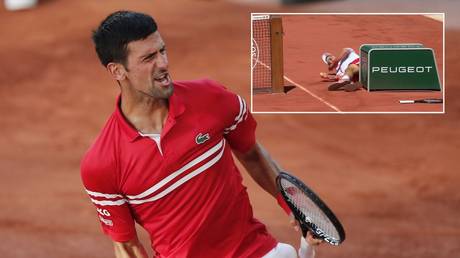