Khachanov showed that he would be a tough nut to crack, fighting off several break points in the beginning of the first set to hold his serve against the world number one player.

The Serbian star, who is eying his 18th Grand Slam title, finally broke his less experienced rival to take a 5-3 lead, but failed to hold his lead, as Khachanov immediately returned the break.

However, Khachanov’s efforts to tie the set appeared in vain as he again lost his serve, committing a double fault at the decisive moment to hand Djokovic the opening set.

In the second set the Russian player again struggled on his serve allowing Djokovic to take a 4-1 lead, which he didn’t squander.

Going 🆙@DjokerNole sits a set away from punching his ticket to the final 🎱#RolandGarros pic.twitter.com/WC8hpknRee

Khachanov saved several set points on his serve to cut the gap, but his efforts to make a comeback were ruined by Djokovic’s precise and powerful hits as the 33-year-old sealed the set 6-3.

Djokovic continued dominating in the third set, converting a break-point in the opening game and holding his serve to create a 2-0 advantage.

The Russian ace revived some intrigue to the match by breaking Djokovic in the fourth game to level the score at 2-2.

Just keeps winning 💪@DjokerNole defeats Khachanov 6-4 6-3 6-3 to reach a 14th quarter-final in Paris and tie Rafael Nadal for the most all-time.#RolandGarros pic.twitter.com/dSDwMQEKTM

But Djokovic stepped up the tempo when it was needed most, restoring his lead and sealing the set 6-3, and with it a well-deserved victory. 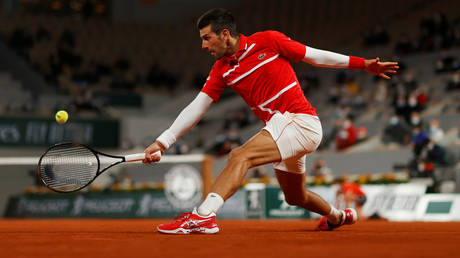