‘Send a selfie’: Premier League ace Ceballos MOCKED as he denies being FLOORED by teammate in bloody training ground spat

‘Send a selfie’: Premier League ace Ceballos MOCKED as he denies being FLOORED by teammate in bloody training ground spat

Arsenal midfielder Dani Ceballos has produced an unconvincing response to a report of an alleged training ground bust-up with teammate David Luiz, telling his Twitter following of more than 632,000 that the incident was made up.

In a testing week for the Gunners, Brazil defender Luiz is said to have taken exception to a challenge from Ceballos in a training session after their side’s 3-0 home defeat to Aston Villa, dropping him to the turf and drawing blood from his nose.

According to widely-trusted reporter David Ornstein, teammates and staff broke up the fight before the disgraced pair were sent home for three days as training continued in their absence.

Ceballos, who did not have any visible scars when he posed on Instagram with girlfriend María Sánchez del Moral earlier this week, refuted the report by simply writing: “FAKE”.

Care to send proof? Maybe with a selfie with the date today Daniel Ceballos?

Proof it’s fake? care to send a photo of your face with today’s newspaper

Ex-Real Madrid playmaker Ceballos and Luiz, who signed for Arsenal from Chelsea last year, were taking part in the session alongside squad members who had not been called up for international fixtures during the week.

Arsenal have already been forced to contend with a number of unexpected concerns over the break from Premier League action, including star striker Pierre-Emerick Aubameyang having to sleep at an airport due to a travel hitch with Gabon.

New signing Willian was also discovered to have taken an apparently unauthorized trip to Dubai, with reports suggesting that the winger’s exotic holiday is being internally investigated by the club.

Ceballos and Luiz are thought to have apologized to the squad and been left to discuss the situation upon their return to training, with Ornstein adding that the 2018 Champions League winner had been involved in a more minor altercation with forward Eddie Nketiah earlier this season.

Fans produced memes likening Luiz to one of his lookalikes, The Simpsons character Sideshow Bob, and cheekily asked Ceballos to prove the incident had not happened by providing a current selfie.

When an Arsenal fan account claimed Ornstein was “desperate”, the vastly-followed journalist replied: “Absolutely not.”

Give the people what they want: Luiz v Ceballos 🥊 pic.twitter.com/VZouxzADy1

Mikel Arteta is said to be delighted that at least one of his players can hit the target.

The report and some Arsenal fans suggested that flared tempers at the training ground were a positive sign, demonstrating some of the passion that the likes of top earner Mesut Ozil, who has not appeared for the club this season, have been accused of lacking.

“[Conor] McGregor against [Dustin] Poirier is boring,” joked one account, referring to the UFC fight that had been officially confirmed hours before news of the dust-up broke.

“Give the people what they want: Luiz against Ceballos.” 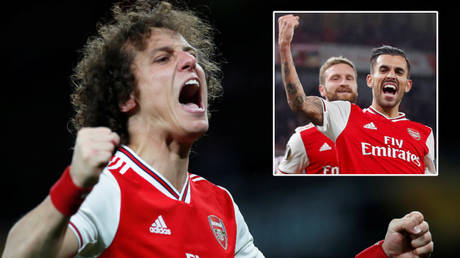