SECOND star from Novak Djokovic’s Adria Tour confirmed as Covid-19 positive but world no.1 ‘REFUSES’ to take test in Croatia

SECOND star from Novak Djokovic’s Adria Tour confirmed as Covid-19 positive but world no.1 ‘REFUSES’ to take test in Croatia

Croatia’s Borna Coric has become the second player from Novak Djokovic’s controversial Adria Tour to test positive for coronavirus, just hours after facing the Serbian world number one in Zadar at the weekend.

Coric confirmed on Monday that he had tested positive for Covid-19, a day after Bulgarian ace Grigor Dimitrov revealed he had contracted the disease.

Both players were part of Djokovic’s contentious new Adria Tour, which began in Belgrade before moving on to Zadar in Croatia.

The final, which was due to be contested between Djokovic and Russian youngster Andrey Rublev, was scrapped on Sunday after news of Dimitrov’s positive test, although not before fans had packed the stands for matches and top 10 stars including Djokovic, Dominic Thiem and Alexander Zverev had mingled freely at social events.

From a couple of days ago.

Dimitrov and Coric, who have both tested positive, in the background talking, no masks, no social distancing, surrounded by people, including the World No.1. https://t.co/ItI8tSCzk3

Coric, who had been beaten by Djokovic in their match on Saturday, announced the news of his positive test on Twitter, writing: “I want to make sure everyone who has been in contact with me in the last few days gets tested.

“I’m really sorry for any harm I might have caused!”

According to reports in Serbia, Djokovic’s fitness trainer Marco Panichi has also tested positive for the illness, although 19 others – including the player’s coach, Goran Ivanisevic, and brother Djordje Djokovic – returned negative results.

Djokovic himself is said to have declined a test before leaving Croatia to return to Serbia, instead seeking medical advice on his return home as he “feels well” and is not displaying any symptoms.

Following the news of Dimitrov’s positive test and the cancelation of the event, Adria Tour officials claimed they had “at all times strictly followed the epidemiological measures in place with the countries where the Adria Tour was organized.“

However, that has not allayed concerns over why the tour went ahead in the first place, being played in front of packed crowds and also seeing players come in close contact including at a nightclub party following the first leg in Belgrade.

Australian world number 40 Nick Kyrgios called the decision to proceed with the tour “boneheaded,” while wishing those infected a speedy recovery.

🤦🏽‍♂️🤦🏽‍♂️🤦🏽‍♂️ Boneheaded decision to go ahead with the ‘exhibition’ speedy recovery fellas, but that’s what happens when you disregard all protocols. This IS NOT A JOKE. https://t.co/SUdxfijkbK

Djokovic had previously acknowledged some of the concerns, although claimed that the Covid-19 situation in the host countries meant the risk was greatly reduced.

“Why do we have a crowd? Why not having social distancing? What is going on and why are they having this kind of event in the midst of a very hard pandemic in the West?” the 17-time Grand Slam winner had said.

“But you know, it’s hard to explain to people that the situation is really, really different maybe in America or the UK than it is in Serbia or surrounding countries.” 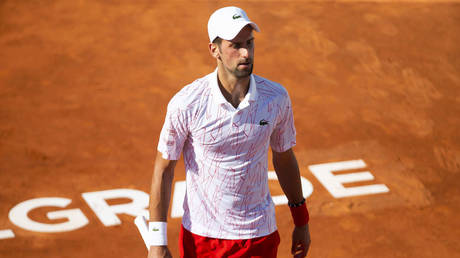 Is the Premier League’s target...

Boxer who copped 10yrs behind...